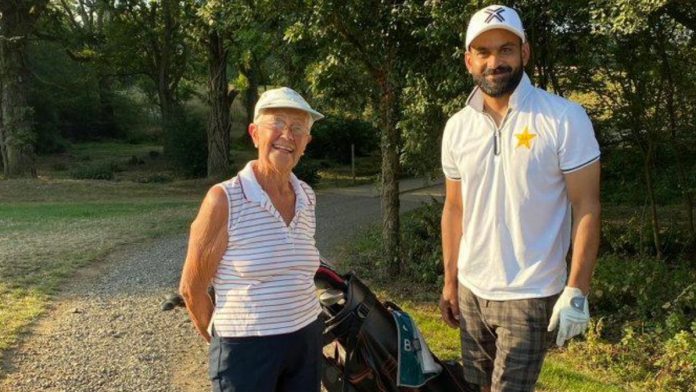 The Pakistani board and team management has put all-rounder Muhammad Hafeez into self-isolation for violating the two-metre social distancing protocol set in place by ICC for cricketers who are to play matches. The news has been revealed by the Pakistan Cricket Board, who have said that the Muhammad Hafeez had breached the social distancing protocols and hence is required to spend time in isolation.

Earlier, the all-rounder posted a photo on his Twitter panel in which he was with a woman  who was 90 years old, now age has nothing to do with the virus or anything, but the all rounder had this to say on his Twitter account, “Met an inspirational Young lady today morning at Golf course. She is 90+ & living her life healthy & happily. Good healthy routine. “

Moreover, a statement from the team management says, “This morning, Muhammad Hafeez went to a golf course, which is adjacent to the team hotel and part of the bio-secure bubble. During the golf round, he was photographed with a member of the public,” After a consultation process with the team doctor, the team management and the good doctor were on the same page and decided to put Muhammad Hafeez in self-isolation, until he returns a negative COVID-19 test, just to make sure no inaccuracies or problems are created for both teams.

Must Read : Pakistan Announce Squad for Second Test Against England

A statement released to the press read, “The decision to put Muhammad Hafeez in self-isolation has been taken for his and, the safety and security of everyone around him. The team management believes it was an inadvertent mistake, but a good reminder for everyone on the importance of following the bio-secure protocols, which have been designed for the health and safety of everyone involved in the series,”

Pakistan is down Bangladesh to take top spot in women’s T20...

Netherlands ODI Squad is announced to play in the Series Against...