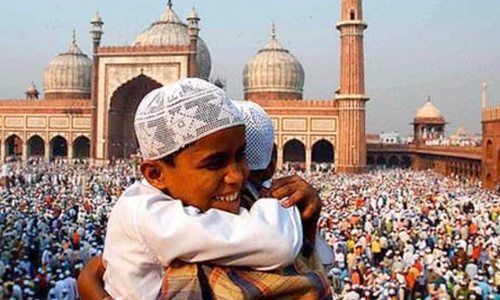 Hajj (annual pilgrimage to Makkah) is performed at 9 Zilhajj (lunar month) and is followed by Eid-ul-Adha, (this Eid is celebrated for three days) and both the events Commemorate the trials and triumphs of Prophet Abraham.

Following Allah’s command to sacrifice the life of his beloved son Prophet Ismail was the main trial of Hazrat Abraham though Allah revealed to him that his sacrifice had already been fulfilled and the trial was successful without the slaughter of Ismail.

What is the Quranic description of Abraham?

“Surely Abraham was an example, obedient to Allah, by nature upright, and he was not of the polytheists. He was grateful for Our bounties. We chose him and guided him unto a right path. We gave him good in this world, and in the next, he will most surely be among the righteous.” (Qur’an 16:120-121)

Such praise worthy description is the consequence of Abraham’s love for Allah that he showed in a way that made it clear that his love for Allah supersedes all others and he prefers laying down his own life and the lives of his beloveds to submit to his Allah.

The trial of Hazrat Abraham is commemorated by the Muslims and they slaughter animals such as sheep, camel, goat, and buffalo on this Eid. Following Allah’s order in Quran, His name is pronounced at the time of slaughter and the meat of the slaughtered animals is equally divided into three parts. One portion is given to friends and relatives, one part is divided into the poor and the left one is for the family that sacrifices.

Though the meat is divided among the Muslims, the Muslims get together and the mutual love and likeness of the Muslims for each other are enhanced.

In the days of Eid-ul-Adha Muslims are seen to be an enthusiast to sacrifice and help others for the sake of Almighty Allah. Allah’s submission seems to be the focal point of the Muslims in these days.

But we must remember that the act of taking the life of the animals has nothing to do with our sins nor the blood shedding of the animals washes our sins.  Allah says in Quran,

“It is neither their meat nor their blood that reaches Allah; it is your piety that reaches Him” (Qur’an 22:37).

So we should not forget the main thing that is the cause of our salvation and should try to become pious and should give up the things of our joy for the sake of others happiness.

To forgive the wrong doers, to let the most beloved things go to the people who can’t afford buying, to forgive a servant for mistakes,  and struggle to shower the happiness everywhere with the help of the sources Allah has blessed you with, is very important.

Allah requires strength of heart, willing obedience and purity in faith from us and we must believe that Eid-ul-Adha is the occasion to practice these traits.