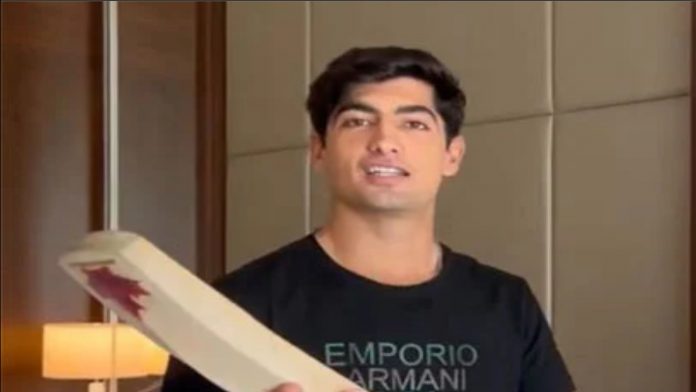 Naseem Shah, the teen all-rounder who has impressed cricket fans around the globe, is showing the world that his passion for cricket is just as large like his sixes. Shah is selling the bat he used smash two sixes and take home his Asia Cup match against Afghanistan to raise funds for flood relief.

On Thursday this week, the PCB released a video featuring Shah as well as Muhammad Hasnain declaring that the bat would be auctioned off in support of an excellent cause. In the footage, Hasnain said “By now you’ve heard about the innings that was played by Naseem who performed brilliantly and led Pakistan to victory. He did this by repeating the sequence in which Javed Miandad scored the sixer, but this time it was Naseem and the shehzada (prince) or our Tiger. The bat was used by him the other night was mine, and I’m giving the bat to him so that you can use it however is he likes to do with it.”

After receiving the bat back from Hasnain, Shah thanked him and said that he would like to sell the bat. Shah said that a half of the profits will go to flood victims in Pakistan.

Singer Uzair Jaswal made a comment in the comments section and declared that he is “proud” about the guys.

The board of cricket, following the victory against Afghanistan posted a video of two young cricketers discussing how they swapped bats during the match. Hasnain claimed that when Shah was about to go to the crease to bat He asked him to play with his bat. Hasnain said that if he struck the ball with a single, he would have take the bat back back to him. He did not, in fact, hit a single. Instead, he struck two sixes, which won the match in the favor of his Pakistan team.

Shah was famous for his bowling abilities, but he also showed everyone in the match that he was an all-rounder. Shah was highly praised from captain Babar Azam, his teammate as well as man-of-the match Shadab Khan, who stated that after Miandad or Shahid Afridi, everyone will be able to remember Shah’s sixes and the former player Younus Khan.

Pepsi Continue Sponsorship With Pakistan Cricket Team Till Next Year