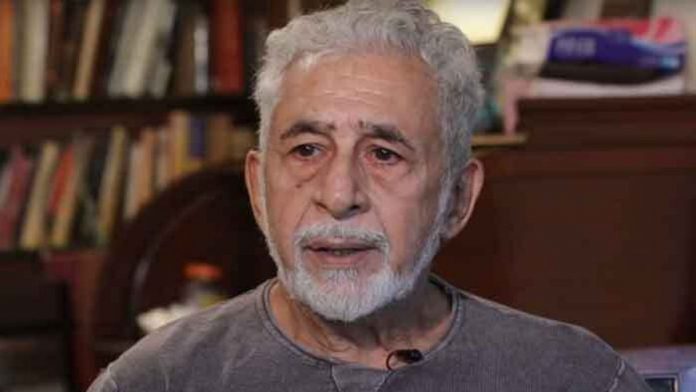 Legendary Bollywood veteran actor, Naseeruddin Shah opens up about living conditions in India after the current wave of nationalistic extremism in the country, which is sweeping whole India after the enaction of CAA and NRC acts. Shah expressed his regrets about the ongoing situation in the country, that India is heading towards a different path. He also showed concern for his children.

Shah, who is a big name in Bollywood, expressed that living conditions in India are deteriorating by each passing day. The country in the current situation holds an uncertain future for Muslims.

Speaking about his children he said that “at this moment as we chose not to give a religious education to our children,” adding further that he cannot imagine the situation where his children come across a situation where a mob surround them to question: “Are you Hindu or Muslim?”

While speaking to an Indian news group, the 69 years old said that for after 70 years, he needed to prove that he was ‘Muslim’, to prove his identity. He further said that passport, voter’s ID, driver’s license and identity card are not enough to prove his Indian citizenship.

“I don’t have a birth certificate. I cannot produce one. Does that mean we are all going to be excluded? I do not need any reassurances that Muslims don’t need to be worried,” Shah said.

About living in fear, he said, “I am not worried. If living here (in India) for 70 years does not prove me to be an Indian, I don’t know what does. I am not afraid, I am not anxious, I am angry,”

Shah was surprised over the attitude of Bollywood stars and their dead silence since the start of the issue. He questioned the roles of the star figures and said that their roles about the burning issue is somewhat understandable, “but one does wonder how much do they have to lose? Haven’t you made enough to last your seven generations?”

He praised Deepika Padukone for raising her voice and her act to show solidarity with JNU students. Speaking about her act of statement Shah said, “she’ll lose a few endorsements, sure. Will that impoverish her? Will that lessen her popularity? Will that make her less beautiful that she is? They’re going to come around sooner or later. The only god that the film industry worships is money”.

This is the first time that Naseeruddin Shah has opened up about the ongoing unrest in India.

Telenor Youth Forum – An opportunity for those Interested in solving...