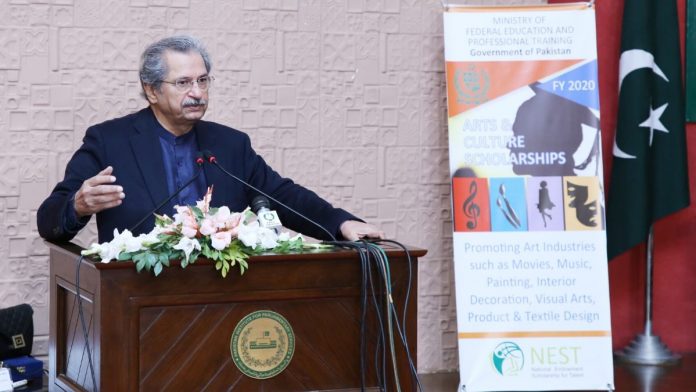 Federal Minister for Education and Literary Heritage Mr. Shafqat Mahmood launched the Arts & Culture Scholarship program today, in Islamabad, which is a unique initiative of the Ministry of Federal Education & Professional Training through National Endowment Scholarship for the Talent (NEST). The program is aimed to promote Arts and Culture in Pakistan, including diverse fields like Film, Theatre, Visual Arts, Ceramics & Textile design.

Unfolding the details of the program Federal Minister Shafqat Mahmood recounted that the first stage of the program comprises upon 400 Scholarships for current year 2020. The Ministry of Federal Education has included 15 top HEC recognized and Degree awarding institutes of the country, both from public and private sectors. Initially PKR 77 million disbursements have been planned for the current year.

Mr. Mahmood stated that the scholarships for Arts and Culture are being provided by the government for the first time in the history of our country. He has said that it is the responsibility of the state to support those who could not pay for education, and this government is not only fulfilling its responsibility but this program indicates the priorities of the PTI government. Highlighting the enriched culture of Pakistan Mr. Mahmood said that the concept of soft power is necessary parameter to determine the power of any country & nation and they are scaling up the soft power of Pakistan by promoting culture, Arts and Heritage.

The Minister said that it would directly promote Art industries such as Movies, Music, Painting, Interior decoration and indirectly promoting the tourism industry. These students would be able to utilize these skills and would help improve their own living standards as well as our economy by impacting Film industry, Textile & design Industry.

The Minister also added that the Arts and Culture preserve heritage, influence society by changing opinions and translate experiences across space & time. Art allows people from different space & time to communicate with each other via images, sounds and stories.

The CEO of National Endowment Scholarship for the Talent (NEST), Federal Secretary for Education Dr. Sajid Yousfani, during his address has said; the idea behind this scholarship program is to ensure that anybody who is talented, and has passion to go forward should not be left behind only because of the financial restraints. This is basically Endowment scholarships and the size of Endowment is 5.2 billion right now; as the size of Endowment would increase, the number and amount of scholarships would also increase, in the future.

ACCA leads the conversation for an Emerging Pakistan

Dr. Arshad Ahmad to Join LUMS as the Next Vice Chancellor