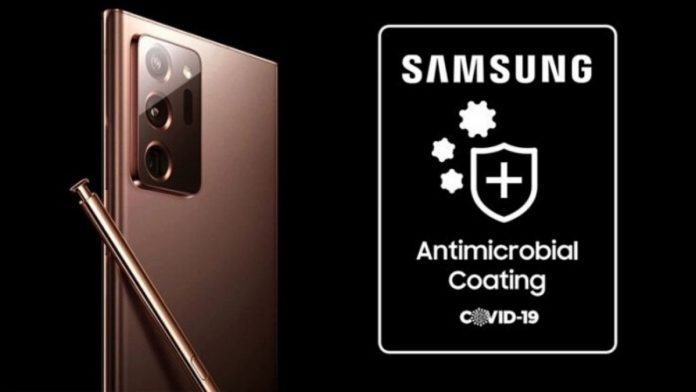 Samsung has just recently gone on to trademark ‘Antimicrobial Coating’ which will in fact be applied on top of the cases which will now be made by the Korean company. This coating has already been proven to be successful in the fight against coronavirus.

For those of you who aren’t too familiar with the concept, Antimicrobial is used so as to fight against virus strains or indeed particles and bacteria on a given surface as well. Due to the fact that the whole world right now is going through a pandemic, coronavirus strain too is considered highly infectious and very easy to pass on. Considering the fact that it has the tendency to survive on some particular surfaces, it therefore also has the tendency to be transmitted via touch as well. And in such circumstances, the Samsung cases make their way across so as to offer protection. Indeed the antimicrobial coating goes on to prevent such particles from staying on the surface of the case.

Must Read : HUAWEI Y6p and HUAWEI Y8p are ready to Rock the Stage

Due to the fact that we still don’t have any vaccine available so as to counter and fight against the virus, both prevention and precaution remain the most effective steps in the war. And so, steps such as these from Samsung are especially important and appreciated because smartphones generally attract bacteria due to the fact that we usually are in constant interaction with the gadgets. The new coating of course would now go on to ensure that the bacteria does not stick around.Ever since the news has come about, the Korean manufacturer has also submitted a patent for ‘Antimicrobial Coating’ – doing so on the 30th of June and also in several countries. Moreover, since the launch of the company’s Galaxy Note 20 series too isn’t very far away, this may turn out to be a very good time for Samsung to unveil such protective cases. While for now it’s still too early to tell when these cases will arrive, one would have to imagine that it won’t take too long.

Next Step For 4G is The Moon!