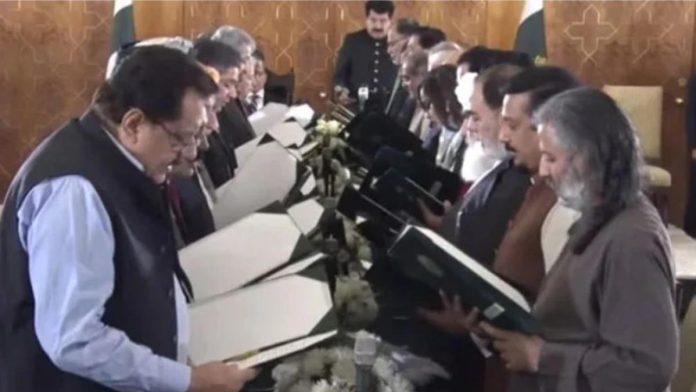 Tariq Bashir Cheema was appointed minister of food security while MQM’s Syed Aminul Haque has been given the ministerial portfolio in charge of technology information and telecommunications.

The PML-N’s Khawaja Saad Rafique was appointed railway minister. Syed Murtaza Mahmood has been named minister for production and industry and the ministry of parliamentary affairs is given the responsibility of Murtaza Javed Abbasi. In contrast, Muhammad Israr Tareen has been appointed defense production minister.

Advisers to the PM

After delegating those portfolios in the hands of the federal minister the prime minister Shehbaz Sharif is convening the first session of his cabinet on tomorrow (Wednesday).

The cabinet under PM Shehbaz Sharif was sworn in, comprising 31 federal ministers as well as three Ministers of State, and three advisors to the premier.

The Chairman of Senate Sadiq Sanjrani administered the swearing in ceremony to cabinet members, as the President Dr Arif Alvi was not able to perform the ceremony on Monday.

According to the latest information The new cabinet comprises 14 ministers from the PML-N, which is the party that controls the government. The PPP include nine federal ministers and two state ministers, and one advisor of the prime minister. Four ministers hail from JUI-F Two are from MQM Pakistan One each of JWP as well as BAP.

LEVI’S® CELEBRATES THAT ‘YOU ARE WONDERFULLY MADE’ THIS RAMADAN