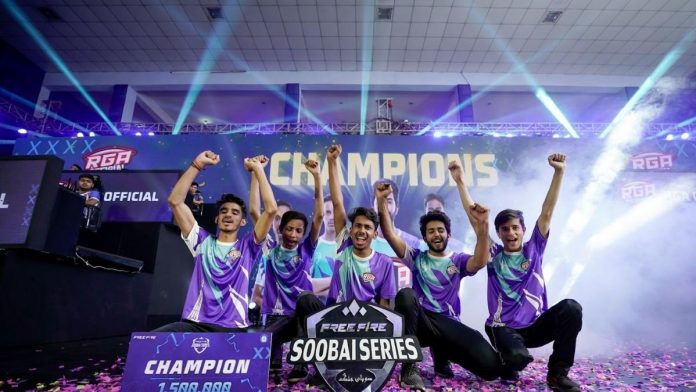 The Grand Final of the Free Fire Soobai Series was held on the 31st of July, at the Gymnasium Hall in Nishtar Park Sports Complex, courtesy of the Punjab Sports Board, where the sports locality marked its first-ever esports event. Garena Free Fire, together with Sports Board Punjab and the Directorate General Sports and Youth Affairs announced the start of a strategic collaboration aimed at strengthening the esports landscape in Pakistan last week. The initiative seeks to enable and equip the growth of a new tide of young esports professional players throughout the country.

The Free Fire Soobai Series took center stage in Lahore as the national esports tournament’s Grand Final unfolded on Sunday, with RGA Official securing the major share of the PKR 4 Million Prize Pool and a guaranteed spot in the group stages of the upcoming FFPL. Free Fire Soobai Series has also been marked as the first esports event that was broadcasted live on television in Pakistan.

The tournament enabled the induction of new professional esports players into the Pakistan ecosystem, with participation restrictions placed on the top 9 teams from this year’s FFPL III. Teams TG and All Stars finished at second and third place, earning play-off spots for FFPL IV and taking home their shares of the prize pool as well. The MVP of the day was Jx.Junaid from Team Janbaz.

The Final was attended by Asadullah Faiz, Secretary Sports and Youth Affairs Punjab, who presented the championship trophy and awarded cash prizes to the winning teams. Tariq Qureshi, DG Sports Punjab and Umair Hasan, Director Youth Affairs Punjab were present at the event as well where the Memorandum of Understanding was signed.

Commenting on the occasion, Sports & Youth Affairs Secretary Punjab, Asadullah Faiz said “We’re delighted to join hands in this strategic collaboration with Garena Free Fire. With the launch of this initiative we will seek to elevate the esports landscape in Pakistan, while engaging the youth and providing professional opportunities in the field of esports. Under Punjab’s first Sports Policy the Punjab Sports Board is committed to facilitating the esports revolution and progressing the field as any other sport in the country”

Free Fire is the world’s leading mobile battle royale game with over 1 Billion downloads and has been at the forefront of the esports revolution in Pakistan. Free Fire is also the proud sponsor of FFPL, Pakistan’s First Professional Esports League, which had previously attained the coveted endorsement status by the Ministry of Information and Broadcasting under Fawad Chaudry and has since then grown to become Pakistan’s top-level Esports League. FFPL IV is scheduled to return this August with a prize pool worth PKR 10,000,000.

Garena is a leading global online games developer and publisher. Free Fire, its self-developed mobile battle royale title, was the most downloaded mobile game in the world in 2019, 2020, and 2021, according to data ai, previously known as App Annie.