Nokia the legend of the mobile industry made its re-entry in the smartphone business last year with the launch of Nokia 3, 5 and who could forget the revamp of the famous Nokia 3310 at MWC 2017.

Thanks to HMD Global for making tremendous return of Nokia-branded smartphones after the Microsoft acquisition ended. There were certain reasons why Microsoft not able to get success by acquiring Nokia Brand. However, things seem to be on their track after the launch of flagship device Nokia8 by HMD.

I remember when I bought my 1st mobile phone that was Ericsson in 1999 and the second one I bought was the legendary Nokia 3310 – dubbed to be stronger than a brick. Meanwhile, Nokia 8 was launched last year in August 2017 but sadly the phone came to the Pakistani market very late. The launch event was held in Karachi on 13th of Dec 2017. We don’t have an idea, what was the reason why HMD launched Nokia 8 so late in Pakistan. Although the Mobile phone market of Pakistan is growing very fast and has crossed 40 million and by the end of the 2020 it will cross 50 million marks.

After launching Nokia 8 last year, HMD Global claimed that it will roll out faster updates than the rivals and will focus on the quality and user experience. Well, how much that claim was true, you’ll definitely find out after reading the whole review.

We got this device in copper color which looks brilliant.

Nokia 8 comes in an attractive looking retail Box which runs on the same theme as of Nokia 3, Nokia 5 and Nokia 6 retail boxes. The box has a device, a hands free, a quick start guide and a charger. 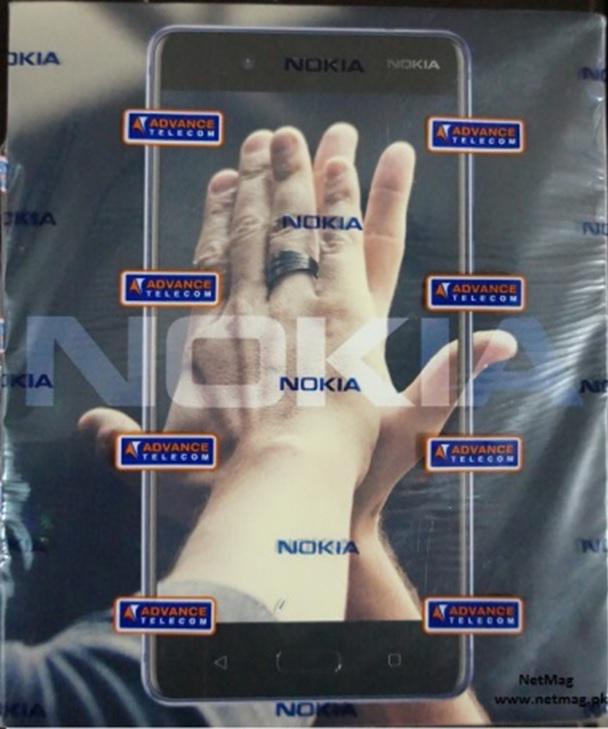 We got this device in Polished Copper color which looks awesome.

Coming to our first impressions, Nokia 8 feels quite elegant and robust at the same time. The Aluminum unibody with a beautiful design, slimmer profile and excellent build-quality makes a lasting “Nokia” impression. The back design along with tapered edges profile makes it easy to hold and use with one hand. 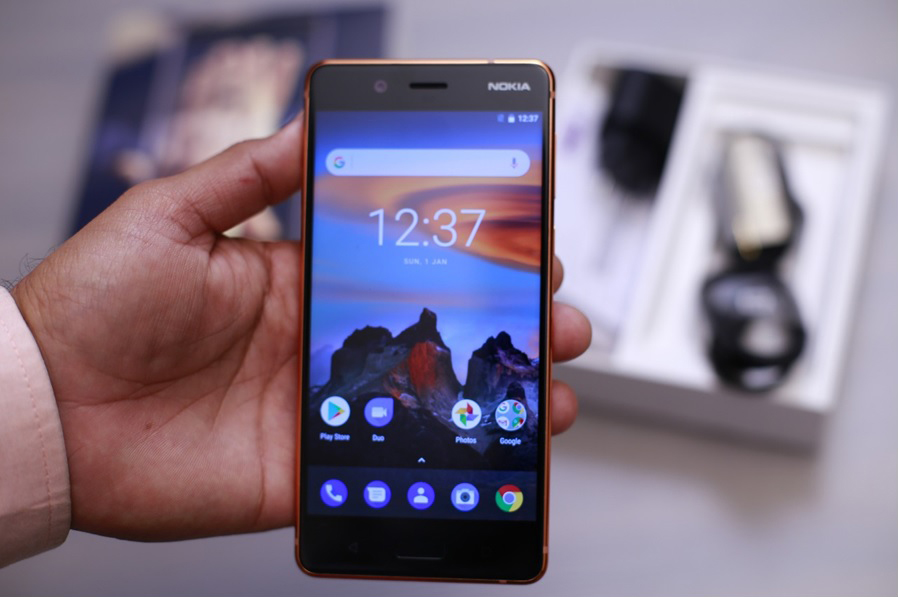 Want to feel royal experience then you need to hold the Nokia 8 in your hands. Its premium metal unibody design screams quality when you first hold it in your hand. With squeaking parts, no loose, and everything in terms of material inform you that HMD Global is nailing the field when it comes to a flagship device.

The build quality is tremendous with all right checks. 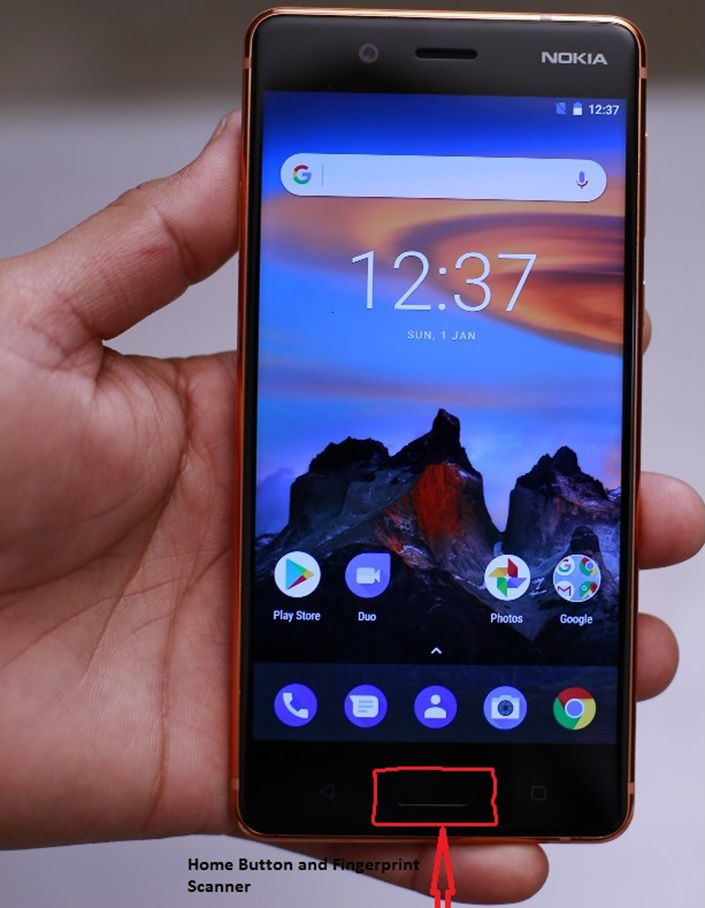 On the front of the device, you will find the home button with an embedded fingerprint scanner along with touch-sensitive navigation buttons towards the bottom of the device. 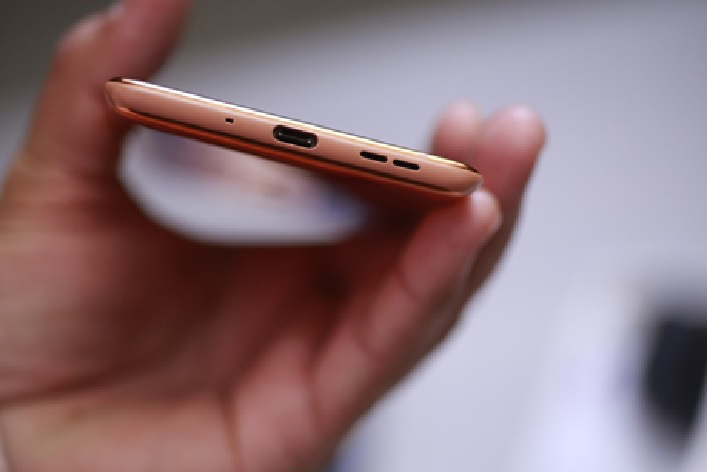 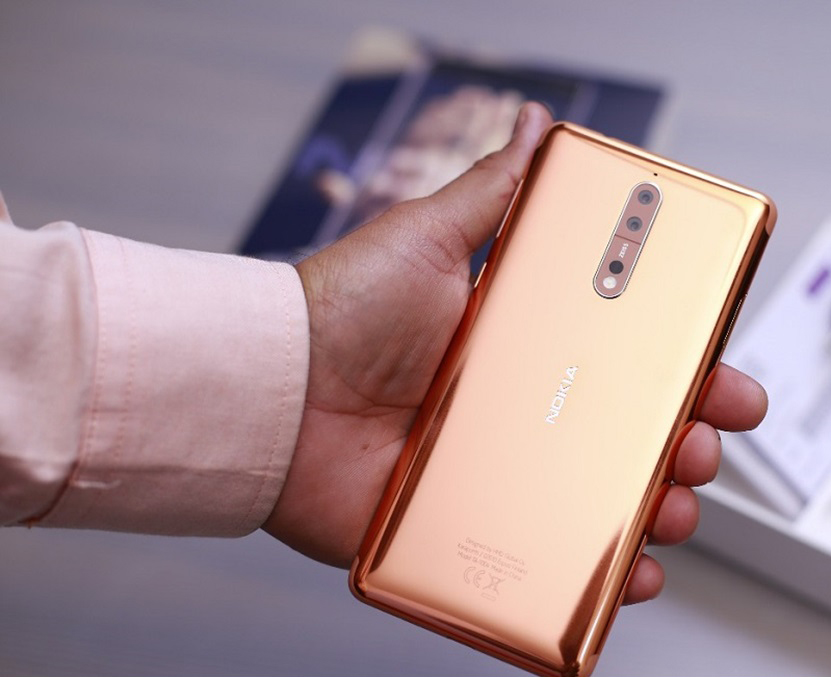 Moreover, there is dual-LED dual-tone flash and the laser autofocus module just right under the ‘ZEISS’ logo. To catch the attention, the camera module is nearly flush with the rear side of the phone.

In a nutshell, accessing all the performance of the design

In terms of features and internal specifications, Nokia 8 has the incredible approach that makes it to the list of “flagship device”.

It is featured by Qualcomm’s SoC Snapdragon 835, which has an octa-core CPU. It comes with a 5.3-inch QHD display with 16:9 aspect ratio.

If you want to increase the storage of the device then you can add a microSD card to the mix with up to 256 GB capacity. The second SIM slot is for insertion microSD card.

Well, Nokia 8 came with Android 7.1.1 Nougat out of the box and afterward HMD Global was one of the few companies to upgrade their mobile to Android 8.0 Oreo. Moreover, the company has already upgraded the device at Android 8.1 Oreo. 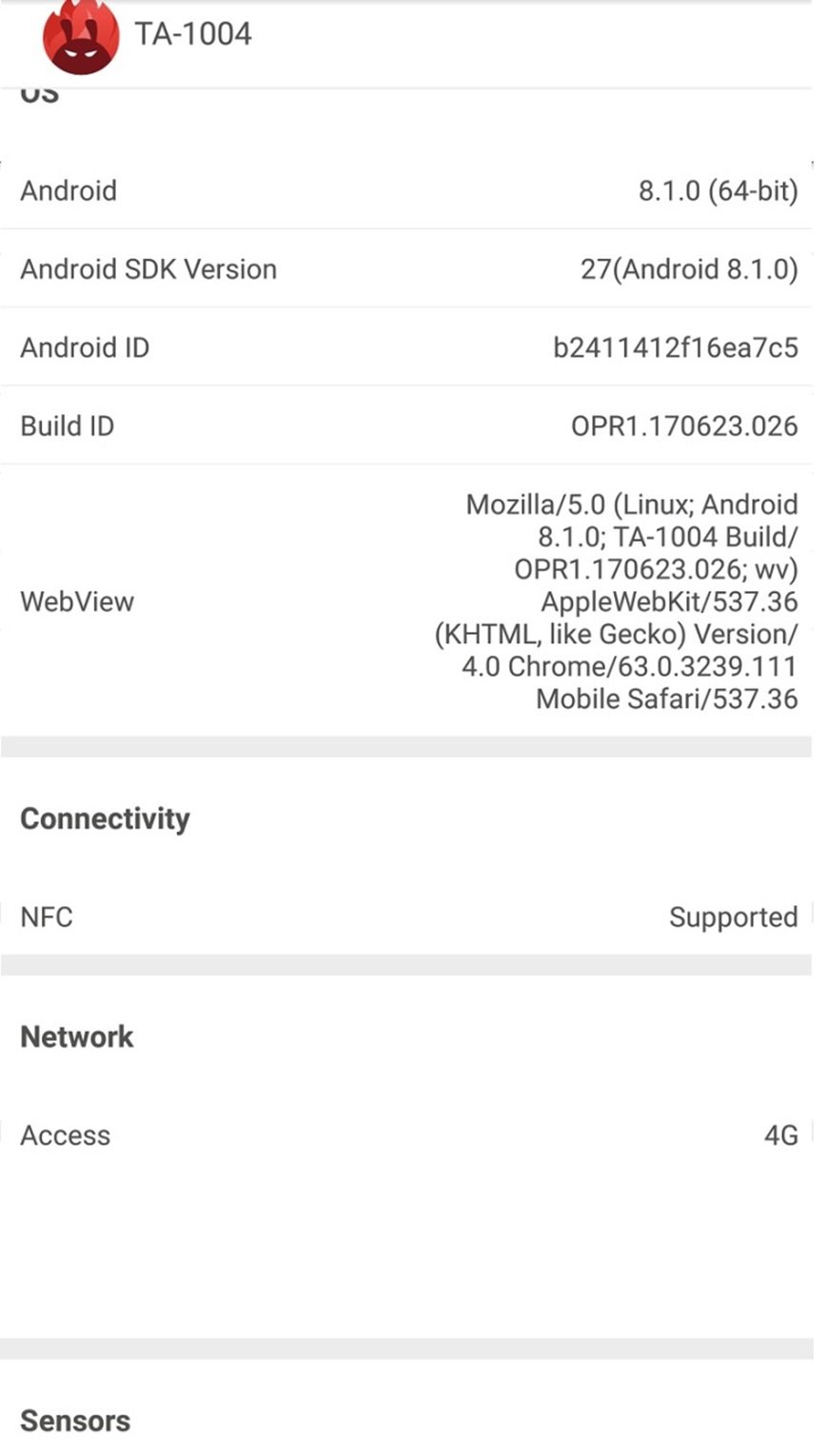 Furthermore, the device has

In addition, it got front-mounted fingerprint, accelerometer, gyroscope, proximity, compass and barometer sensors. And the end, it packs a 3,090 mAh lithium-ion battery

Must Read: Release of Nokia 8 Pro with Snapdragon 845 is expected later in the year

HMD global presents Nokia 8 with a 5.3-inch QHD screen with IPS LCD panel and in order to save the screen from accidental scratches; it has Corning Gorilla Glass 5.

It comes with a 16:9 aspect ratio and 1440×2560 resolution, the screen boasts an inspiring 554 PPI pixel density. On the other hand, the design of the device does not comprise the ‘near bezel-less’ appearance factor that latest devices have. 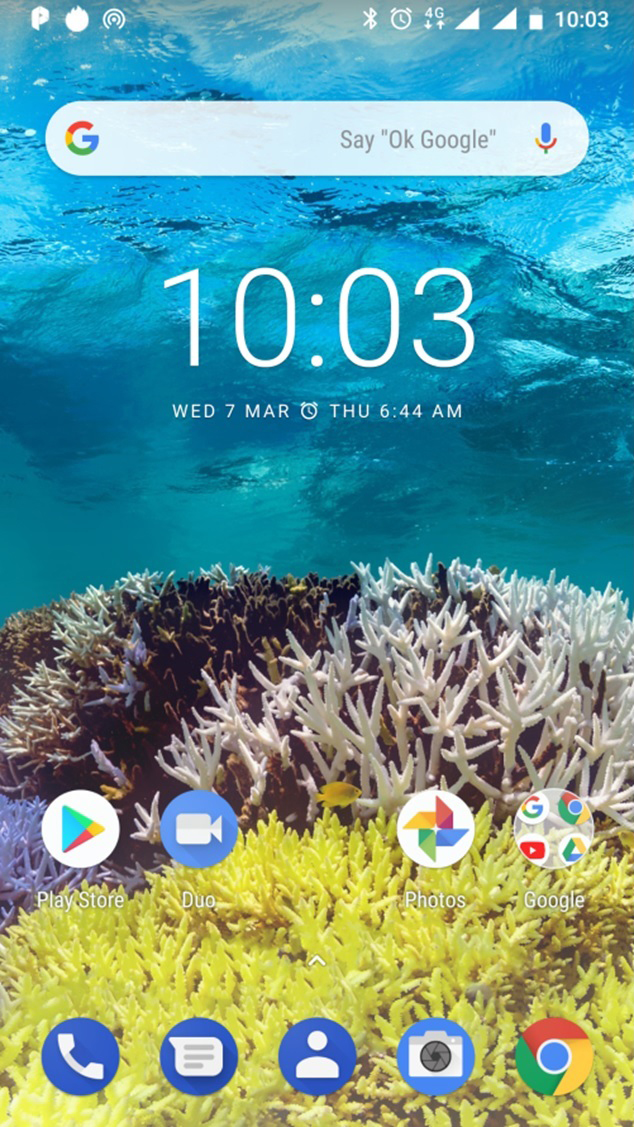 The color rendering, sharpness, and brightness of the display is spot on devoid of any problems. While the screen is reflective however the brightness manages to beat it in routine usage. Like many devices, you will look for some shade while trying to operate the phone in direct sunlight.

Nokia 8 was one of the fastest to roll out Android OS upgrades, as well as monthly security patches. It was good to get monthly updates that guaranteed that the experience was excellent.

On the other hand, the system comes with almost no bloatware and the single app that I could observe was the ‘Support’ app. Well, it is pretty well designed, but not an over the top web-wrapper app. 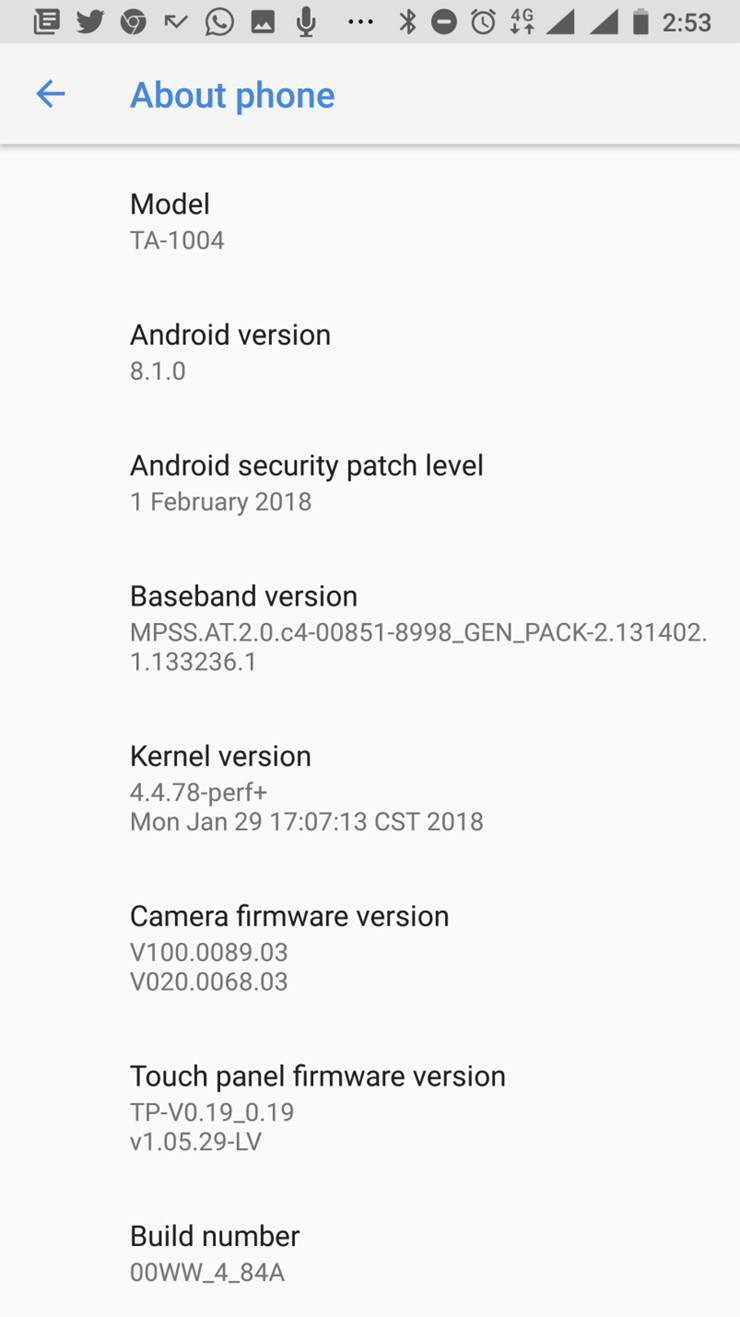 It notifies the users about their ‘warranty status’, ‘nearest care center’, and a ‘device monitor’ and some other check marks about the health of the battery and data and storage use.

Well, to be honest, I did not bump into any lags, issues, system or app crashes throughout the one month time period of using the device.

When it comes to Nokia 8 performs it runs without any hiccups, slowdowns or crashes. Well, any smartphone savvy will get to know that if the device is powered by Qualcomm’s current flagship SoC, Snapdragon 835 with Octa-core CPU where four cores are clocked at up to 2.46 GHz for higher performance and remaining four cores are clocked at 1.9 GHz for efficient performance then obviously it will run smoothly. As I go through my intensive daily usage without breaking a panic. 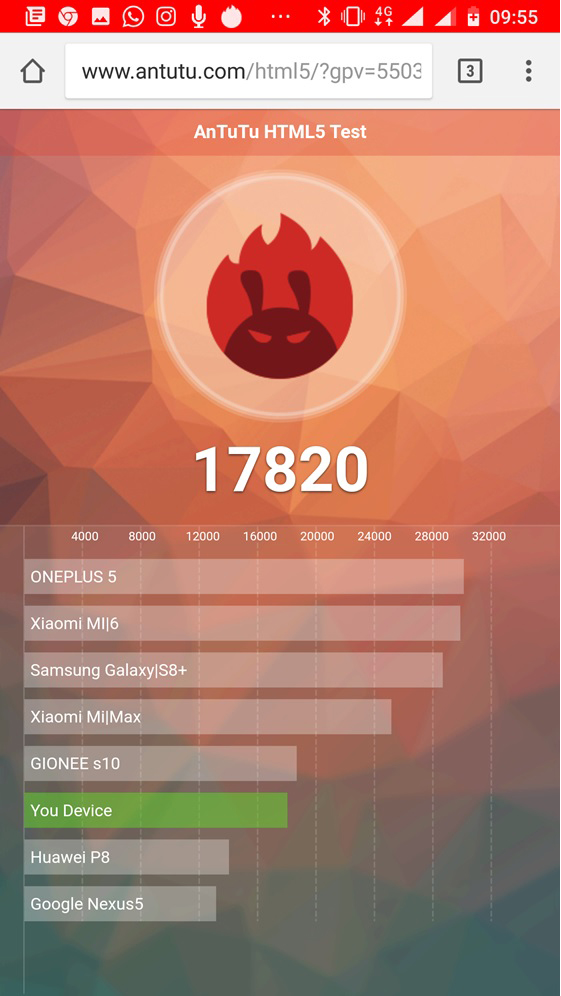 Moreover, the voice clarity was spot on while making internet or cellular calls with the device. However, Nokia 8 did get heat up in the severe sessions, but the heat was equally distributed on the rear side instead of being intense in one spot. But thankfully the device is also relatively quick to cool down for the reason that it got metal back.

Apart from the fact, that long ago Nokia devices were known for great camera sensors and evenly stellar image quality. However, this time I don’t feel happy to say that the camera quality of the Nokia 8 is not extra-ordinary. 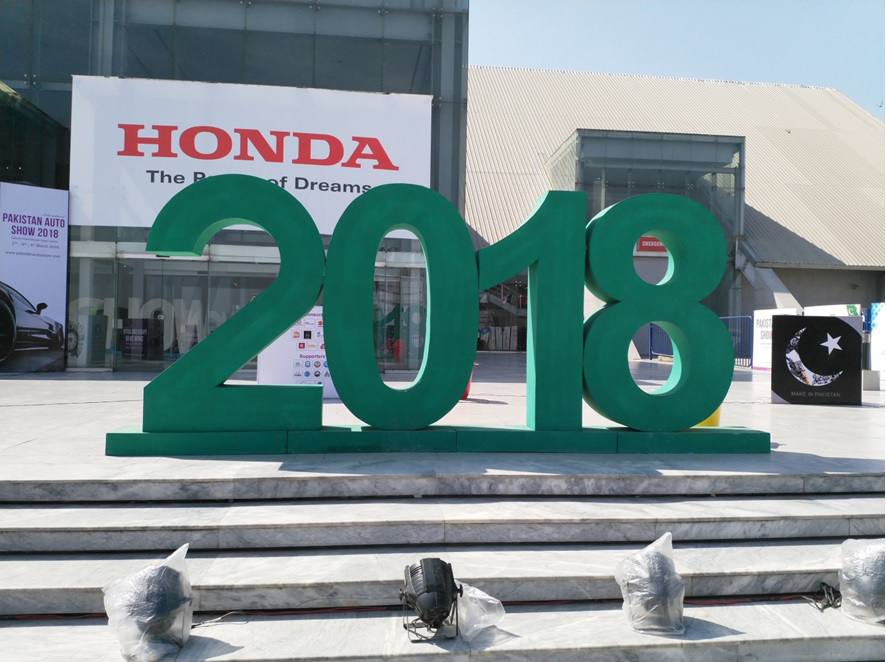 On a surprising note, HDM Global has also added a Zeiss branding on the camera module. Apart from Image quality, I also realize that software is a bit problematic. One of the major problems that you could face in the software is the unoptimized UI design. Just think how on earth one needs to tap on two buttons to switch from the back camera to the front and vice-versa.

However, the ‘Bothie’ mode of the camera is actually significant for some people to capture a selfie and an image from the back camera to showcase what is in front of a user and their reaction to the subject or object in front of them. 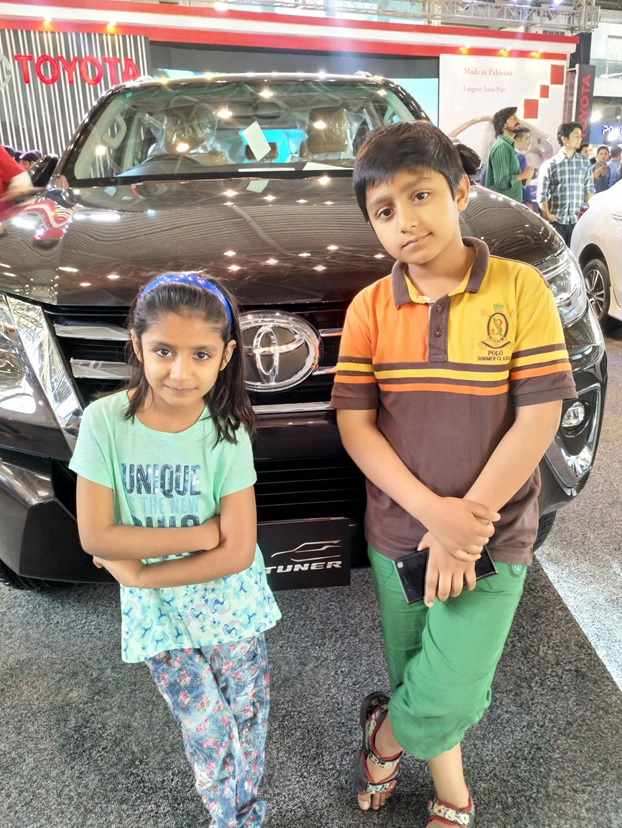 It did offer the option to stream the video being shot on Facebook as well as YouTube but the streaming using both the front and the back camera tends to heat up the device considerably, and that too fast.

Well, to be honest, HMD Global has done a modest job with the battery optimization on the Nokia 8. For daily usage, the phone would easily last a work day for me even with its 2K screen.

The usage would include two email accounts on sync, constant emails, gaming for about an hour, WhatsApp and Telegram messages, 15-17 photos and listening to music for about an hour or so. The device lasted 8 hours on the PCMark Work 2.0 battery life test with the screen constantly on for the length of the test.

In a nutshell everything is fine overall with Nokia 8 apart from camera department. Well, I have this complaint due to the fact that Nokia 8 leverages ‘Nokia’ brand name and does not convey the camera quality that it should be. The body of the phone is little slippery but can be handled carefully. Nokia 8 is a decent offering in this price range and can be considered as a tough rival for many heavy weight champions.

Samsung may be working on a less expensive Note 10