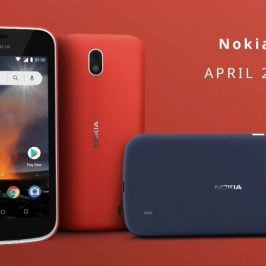 On Friday, HMD Global announced three new additions – the Nokia 7 plus, New Nokia 6, Nokia 1 – to Nokia’s smartphone family alongside a revamped version of the Nokia 8110 slider phone, known as the “banana phone”.

The new phones are targeted at all kinds of consumers with variety of price points. Brand’s latest offerings come with appealingly affordable retail price tags ranging from S$129 ($96.46) to S$599.

Nokia 7 plus & New Nokia 6 are the latest members of the Android One series of smartphones and run on the unmodified Android operating system. Android OS allows both these phones to receive the latest security updates from Google without interference to battery life, user interface (UI) & processing speed.

Users will be able to get fast and secure updates. When users push the update through, there is no need to recreate, re-fix and even reconnect the UI or apps in the device.

The Nokia 7 plus is featured with enhanced Dual-Sight, dual rear sensors with ZEISS optics to let its “ultra-sensitive” 12-megapixel (MP) wide-angle primary camera to capture photos in low light & extra bright conditions. A secondary 13 MP has also been found on this phone.

The New Nokia 6 is an upgraded version of its predecessor thar boasts a 16MP rear camera with ZEISS optics alongside dual-tone flash and a 8MP wide-angle front camera.

Both the phones are armed with the powerful Qualcomm Snapdragon 660 Mobile Platform & 630 Mobile Platform. Both the devices function like any regular Android smartphone without much noticeable difference.

The Nokia 7 plus available in Black/Copper and White/Copper, is priced at S$599, is more comfortable to hold than the New Nokia 6 which feels sharp around the edges.

The New Nokia 6, available in Blue/Gold, and comes with price tag of S$439.

The phone comes with a surprisingly low 1GB of RAM and is  available in Warm Red and Dark Blue colours under the price tag of  S$129. Nokia  will go on sale from end May.

The Nokia 8110 is an upgraded slider phone with a bevy of new features.

The company claims Nokia 8110 to be the second most popular phone by Nokia. The retro classic has retained its curved “banana phone” design with intuitive tactile mechanics and a slide cover to enable users to answer calls by sliding open to answer & close to end.

It is equipped with the Qualcomm 205 Mobile Platform processor to  give 4G functionality and connectivity.

The Nokia 8110 is available in its Traditional Black and Banana Yellow colours. The phone will be on sale from end May at a retail price of S$109.

The Super-Stylish Vivo S1 is Now Official in Pakistan