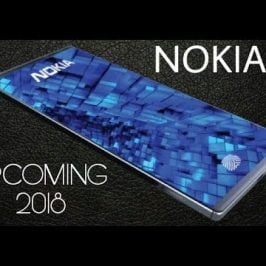 Nokia X, at the distance of 11 days to surprise us. The latest reports regarding HMD Global suggest that company is set to launch a mysterious smartphone “Nokia X”, and the launch date is not scheduled too long as the company has decided to launch it on 27th of April, 2018.

The report issued by a Chinese blog IT Home, gets accompanied by  a digital advertisement teasing the ‘X’ logo with two sleek smartphones crossing each other, while the launch date fir this phone is mentioned below.

The leaks and reports did not suggest any design elements or specifications of the smartphone. However it is not bad to expect the Nokia X sporting up to 6GB RAM, 64GB onboard storage. It might be powered by a Qualcomm mid-range SoC. While, VTechgraphy notes that the phone will be available with 64GB of storage alongside either 4GB or 6GB of RAM.

Line of Nokia phones launched this is will get expanded with the upcoming Nokia X, teased for an April 27 announcement.

Must Read: Black Shark with “Liquid cooling system” is the best gaming phone

As the name of the phone apparently uses the letter ” X ” rather than the number 10, this probably is not aimed as an iPhone X competitor.

VTechgraphy has noted that according to a user on Baidu –a Chinese forum– the Nokia X will get apparently launched in both Snapdragon & MediaTek varieties.

In case the spec rumors mentioned above are accurate, then the Nokia X is probably more upper mid-range than a high-end smartphone. And that is the reason that Nokia X is being suggested to be placed in line with mid-range smartphones, rather than flagship line.

Marketing strategies for the phone are also not known till yet, so we can’t say words about the global launch of the phone.

According the teaser spotted in China and snapped by IT Home the upcoming Nokia X phone does look like it might have slightly curvy metal edges.

A point to be noted is that Nokia X probably has nothing to do with the old Nokia X phones that were launched back in 2014.

For details about the specs, price and marketing strategies for the new Nokia X, we will have to wait for a couple of weeks. So stay tuned with us so that we share the required details of the phone with you.