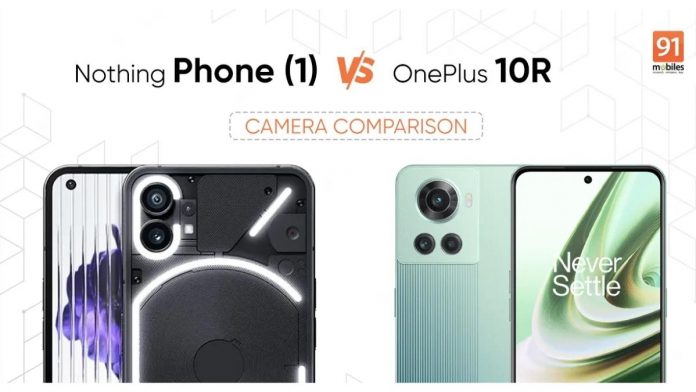 The OnePlus 10R is the company’s most affordable flagship phone that is available. Due to recent sales on the phone, it has become quite competitive in its market with a stunning display, a powerful processor, and lightning fast charging. However, how does it compare to the new competitor The Nothing Phone (1)? We’ll discover that in this comparison of specs between the Nothing Phone 1 vs OnePlus 10R.

Personally, we think it’s a bit dated. OnePlus 10R features a lackluster design, despite the extra elements that are on the back. However it’s Nothing Phone (1) is perhaps one of the most attractive phones available in this category.

There is opportunity to allow this OnePlus model to stand out in this area? The answer is yes, but design is usually dependent on perspective, and some may prefer the more streamlined design that is the OnePlus 10R. For the majority of people users, The Nothing Phone (1) would be a good option in terms of its pure design.

One of the most notable features that is included in this Nothing design is the clear back cover that has a grid of LEDs, which is what the company calls”glyphs. The white model is, in fact, is extremely sought-after (and out of inventory) provides a glimpse of the insides, including those wireless charging coils as well as lighting LEDs. Be aware that these lights are more than just a fun party trick. The company has also added a custom LED light-up pattern that is based on the ringtone you use and can also show your phone’s charging status.

Then we’ll look at the OnePlus 10R, this model has a different style by incorporating a boxy style with dual tone finishes. To give the company some merit, the two-tone finish as well as the camera’s design makes it stand out in the lineup. We personally do not like the boxy appearance and leave it to you to decide which has the better design. There are two options for color available for OnePlus 10R, Sierra Black and Forest Green.

One of the major drawbacks for the 10R model has to do with the absence of an IP rating. The most surprising thing is the absence of the iconic alert slider , which is present on the other OnePlus flagships. Even the less expensive OnePlus Nord 2T is equipped with a slider button located on the side and it’s an unfortunate that OnePlus chose to eliminate its slider on 10R. Contrary to the Nothing model comes with the IP53 rating and cleverly uses the glyph interface to notify users.

The Nothing Phone (1) comes with the 6.55-inch OLED panel that has FHDand resolution. For comparison with the OnePlus 10R features a much bigger 6.7-inch panel. Both come with HDR10+ support and Corning Gorilla Glass 5 protection and have a an 120Hz refresh speed.
The OnePlus 10R comes with an impressive display, which offers an excellent display that gives Nothing Phone (1) solid opposition. It could be one area in which the phone can beat it’s Nothing model, but in the end it’s unlikely to be that significant. In the end, both phones feature great screens.

The No Phone (1) has an entry-level Snapdragon 778+ processor. By itself the processor is enough to be used for everyday use, with occasional gaming. However, when you compare it to the processors in its closest competitors you will notice that the processing power is far short. For instance The OnePlus 10R comes with the MediaTek Dimensity 8100-MAX that comes with “AI speed boost”. Although this “AI boost” could not bring significant performance enhancements when compared to the regular version however, the processor by itself is quite powerful and can beat that of the Snapdragon 778+ in the Nothing Phone (1). Particularly if you’re an avid gamer searching for a phone with this price range and price range, it is the OnePlus 10R would be a more suitable option as it has a good thermal control. If you don’t enjoy intense gaming, both phones will be able to be able to meet your needs.

The Nothing Phone (1) comes with both 8GB and 12GB RAM models that can hold up to 256GB of memory. Similar is the case for the OnePlus 10R too.

The Nothing Phone (1) features Nothing OS on top of Android 12. The other phone the OnePlus 10R features the OxygenOS 12.1 version. Both phones come with a minimal amount of software bloatware and a smooth user interface. But like most OnePlus models, you might encounter minor bugs in between. We’re not saying that it’s perfect, but the Nothing Phone (1) is not perfect, but that’s especially true considering it’s the first model.

The Nothing Phone (1) comes with a dual camera setup, with the 50-megapixel OIS main camera as well as a ultra wide-angle 50MP camera. Its OnePlus 10R OnePlus 10R also starts off with a primary camera of 50MP however it comes with an 8MP ultra-wide, lower resolution camera, and also two-megapixel macro camera.
We’ve observed how the Nothing Phone (1) can produce decent images using its ultra-wide and primary shooters regardless of the lighting conditions. It’s the OnePlus 10R also features a decent primary camera, however, it might not be able to compete with the 50MP camera on the Nothing Phone. Ultra Wide camera.

For selfies for selfies, the Nothing model comes with an 16MP camera, while the OnePlus model has cameras with 16MP resolution. Both are suitable for selfies on occasion.

Battery is another area in which this OnePlus 10R outshines the Nothing Phone (1) in regards to the power of its charging. The most expensive model of the 10R comes with a battery of 4,500mAh and a 150W charger. The less expensive models also have the 80W charger (with bigger batteries of 5000mAh) this makes charger of 33W of the Nothing phone look incredibly slow.

Wireless charging is a major advantage over the Nothing model as it’s an uncommon feature in this category. It is possible to choose the 33W charger in lieu of a different and more efficient charging method.

The Nothing Phone (1) retails for Rs32,999/PS399/EUR469. It is the OnePlus 10R is currently heavily reduced on a variety of websites within India. It is expected to be priced at as as the price of Rs30,249 within the coming days.

If you are more concerned about display, performance and charging, and love the OnePlus range, then the OnePlus 10R is a good option. However, if you’re looking for something different, with a unique design, top-quality cameras, an IP rating and wireless charging The Nothing Phone would be the option to pick between the two.

Be aware it is important to note that Nothing Phone (1) is the first generation model. It is possible that the phone will be plagued by a few bugs and even hardware problems and you should be aware of these issues before you purchase. Even if you’re an avid fan of the Nothing phone it’s likely to be a good idea to wait several weeks to determine how the phone performs in actual use.

None Phone (1) Compares to OnePlus 10R: CONS and CONS

SAMSUNG TO RETHINK NAMING STRATEGY AFTER THE GALAXY S10

Pre-order for Xperia 1 starts from the 28th