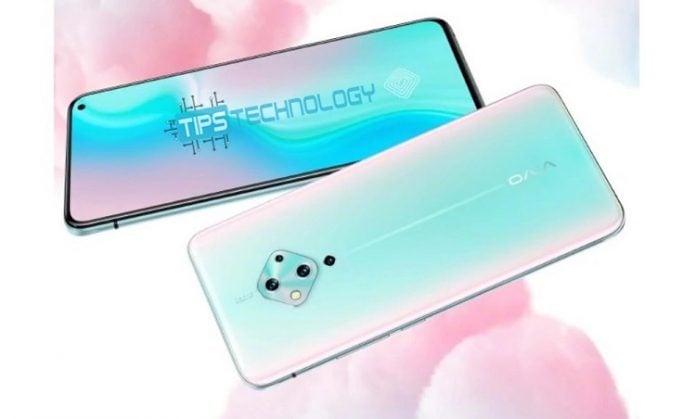 Today is the day on which vivo will launch their Vivo S5 and another of its sibling with the name of S5 Pro. There are a few details which leaked through some rumors about the phone. It has a beautiful punch hole design with a front facing selfie camera. Every phone which is launched has a bit of uniqueness about itself which attracts the buyer. This phone also has that uniqueness which will surely pull the buyer to buy it. Rumors suggest that the rear camera of the phone has a diamond shape which surely adds to the beauty of the phone.

The addition of the colour glossy blue surely makes the phone look wonderful as this colour is mixture of pink and blue. The only difference is that the borders of the camera is done by deeper blue.

Must Read: Get ready cricket fans, Test Cricket will officially return back to Pakistan

The arrangement of the lens is almost quite identical.3 lenses and a flash inside the bump, while the remaining fourth one resting right underneath the jutting module. It has a stunning 4-8 megapixel camera and assisting it is a 8-megapixel ultrawide angel lens and a 5-megapixel depth lens, the 2 megapixel sensor is yet to be confirmed until now.

As there is no fingerprint shown in the picture on the back or on the sides so it indicates that it has a in-display fingerprint. It has a large 6.44-inch display along the selfie cam holding punch-hole. The phone is totally designed according to the modern needs as the phone has an 8GB RAM and supported by 64/128 GB space which is the utmost need nowadays. Another important aspect is the battery and for such an amazing phone battery also plays a major role and this phone has 4010mAh battery with 22.5W fast charging.

There has been confirmation from Qualcomm that Samsung Galaxy S23 will...