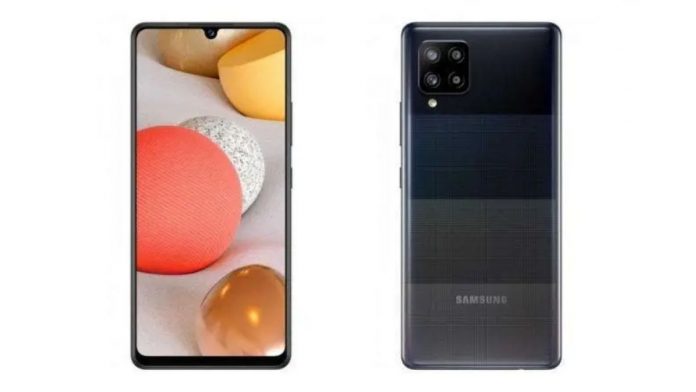 At the beginning of last month, Korean manufacturer Samsung proceeded on to announce the Galaxy A42 5G smartphone. Starting from the coming month, it is also expected that the device will go on sale in Europe – in particular, in Germany. Coming in at 369 euros – this device comes in with the title of being the cheapest 5G smartphone from Samsung. The press release that Samsung carried out last month actually showed the phone in black color. And now, an official listing has emerged which showcases the phone from Samsung in other color variants.

Indeed in such renders, the Galaxy A42 5G can be seen in colors that include that of black, white and gray. Also it is indeed in these renders that the smartphone can be seen as sporting a unique quad-tone design. The smartphone will make its way with a square-shaped camera module for the sake of its quad-camera setup while on the front of the phone is present a waterdrop notch display.

Must Read : Galaxy A50 becomes the first device to receive the October 2020 security patch

The Samsung Galaxy A42 5G features with a 6.6-inch AMOLED display that goes on to offer a 1080 x 2400 pixels full HD+ resolution and an aspect ratio of 20:9. Also, there happens to be a fingerprint scanner integrated within the display of the device.

The One UI 2.5 that happens to be based on Android 10 OS comes pre-installed on the smartphone. It is also said that the device will be powered by the Snapdragon 750G chipset along with six gigs of RAM. Also, within the device will be integrated a 5000mAh battery so as to keep the lights running.

As far as the case goes for the selfie camera – the Samsung Galaxy A42 5G makes its way with a 20MP front camera. On the rear of the phone is present a quad camera setup featuring a 48MP main camera along with an 8MP ultra wide sensor, a 5MP macro sensor and finally a 5MP depth effect lens.

Quick Charge 3 Plus announced by Qualcomm

Samsung Galaxy X foldable and a transparent display smartphone to be...