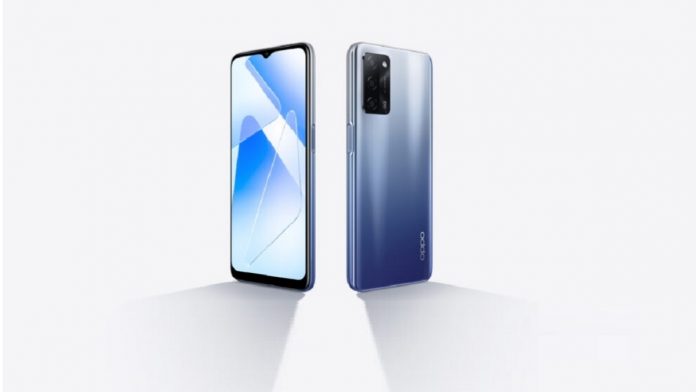 Oppo has just launched a new budget smartphone which the Chinese giants have  dubbed as the A55 in China. The new device has been launched just alongside the recently launched Oppo A93 5G which is another budget-friendly and pretty nifty 5G capable smartphone launched by the company. Keeping it to the discussion at hand, the all new Oppo A55 comes loaded with a MediaTek Dimensity 700 chipset along with a pretty heavy battery, which will give users a pretty good amount of run time on the smartphone.

The phone is very identical to the recently launched OPPO A93 handset, in terms of design at least. The new smartphone has taken up quite a few features from the A93. The A55 has a very similar rectangular camera bump and also a very similar semi-matte finish back. In addition, the Oppo A55 is built around a 6.5-inch LCD equipped with a HD+ resolution, a waterdrop notch, and a standard 60 Hz refresh rate. As far as the internals of the smartphone are concerned, the new smartphone gains power from  the Dimensity 700 chipset and is topped with 6 GB RAM and 128 GB onboard expandable storage.

Must Read: Hidden shortcut to make way on Android 12

In terms of the software, the phone runs the ColorOS 11.1, based upon the Android 11. Oppo A55 5G comes with three cameras on the back which feature a 13 MP main sensor, and two 2 MP auxiliary shooters, one for depth sensing and one for close-ups. In contrast, as the smartphone comes with a mid-range chipset, this has limited the video recording to 1080p at 30fps, while slow-mo clips can be captured at a 720p resolution on the handset. For all those selfie lovers out there, the phone has a 8 MP single sensor shooter which will give you some decent selfies when and if required. The whole system is powered by a 5000 mAh battery with the conventional USB Type-C port and supports 10W fast charging. The phone has been priced at $245 on the website GSMarena.

Infinix teams up with BNU to bring the best photographer with...