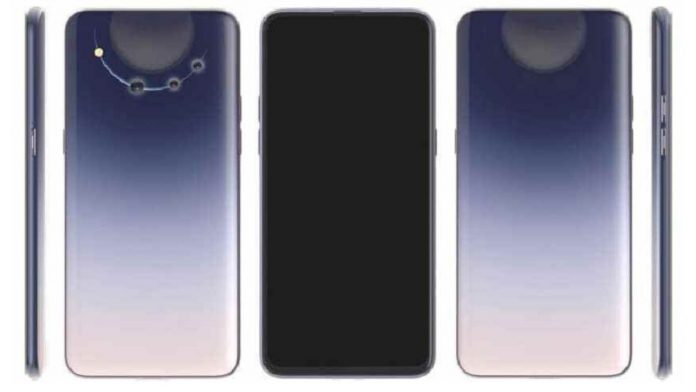 So it is no hidden fact that at times patents of so many mobile phone devices often show us a rather bizarre looking design and other related information of the device which are still to be officially released by the company themselves. Well a certain company from China, namely OPPO has done just that with their newly granted patent after the company has opted for a camera design which looks like a crescent shaped moon(half-moon designed mobile device) which honestly gives the overall device a pretty unique look in terms of design. Interestingly, the patent which has been granted by the State Intellectual Property Office of China has shown us a very innovative camera design which by the looks of things is a take on the Lunar cycles of the moon(half-moon designed mobile device), giving the device not just a unique and elegant design but also a sense a symbolism to attract the astronomy lovers of this generation, perhaps!

Moving on, the crescent-shaped string of camera sensors which also include an LED flash is arranged under what seems to be a translucent sphere. It is still pretty hard to see whether this sphere is a special camera sensor or that it has a totally different function, than one would one expect. On top of that, another leak surrounding the said device with the same patent gives light to the camera setup with the same translucent sphere but no camera sensors underneath. If the rumors are to believed then in accordance with those rumors this may in fact  be Oppo’s version of the disappearing camera technology that OnePlus showed us at the global event CES.

Now moving on to the sphere itself, according to the patent shows that it is equipped with an array of LED lights all around the edges. Now in our opinion, these could be used as notification lights or to display unique animations. Furthermore, it has also been predicted that this smartphone could be the Chinese giants giant upcoming flagship device for the year 2020, which is to be dubbed as the Find X2, but with that being said it should be noted by our viewers that there is yet to be an official word or say a  public announcement by the company so be warned, so far nothing has been confirmed.

The latest confirmations with respect to the Poco M2