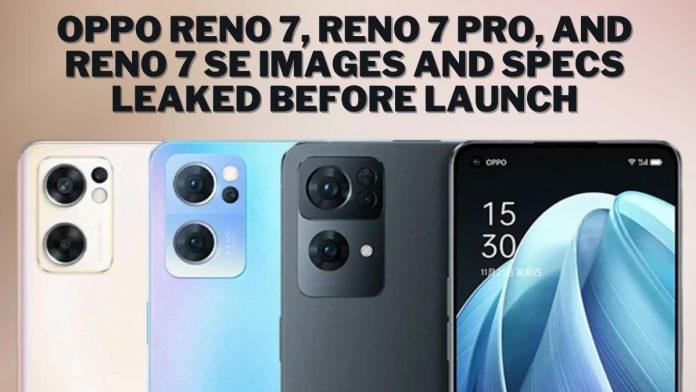 Oppo Reno 7 series has been mentioned in a lengthy sequence of leaks in the last couple of weeks. Now that we’re two days removed from the launch date, there are three Reno 7 models listed on JD.com, an online retailer. The pages for the models include details and previews. It’s the second revision on the Reno line due out this year.

Reno 7 SE is the lowest priced among the three Reno 7 phones and the first SE version in Reno’s Reno family. Oppo has stuck in the same flat edges design used on Reno 6 and the Reno 6 series. It’s somewhat inspired by the latest iPhone 13. The thick bottom bezel surrounding the display offers an uninspired look. The display is a hole-punched OLED screen.

The chip is MediaTek Dimensity 920, powered by a battery of 4300 mAh and a 65W charger. 8GB of memory is enough for multitasking. The phone is available in 128GB and 256GB memory options. Reno 7 SE (like the other two Reno 7 phones) comes in Starry Rain blue, Dawn Gold, and Starry Night colors.

Also Read: OPPO F15 is Available at an Exciting New Price in Pakistan

Oppo has dropped its sparkling “Reno Glow” finish to create an elegant and simple matte appearance. The bezel is cut by the Reno 7, giving it a more luxurious appearance. With a thickness of 7.59mm the phone is light and slim.

Reno 7 Pro Reno 7 Pro will be the most expensive Reno phone of the season. Because it’s at the top of the line, Oppo has made it slim and uniform throughout.

In its core, the Reno 7 Pro has a custom MediaTek Dimensity1200 chipset. It’s high-performance silicon paired with the same battery, storage and memory configurations as the Reno 7.

Secrets Revealed from Smooth Experience of Kirin 960 in Huawei P10...