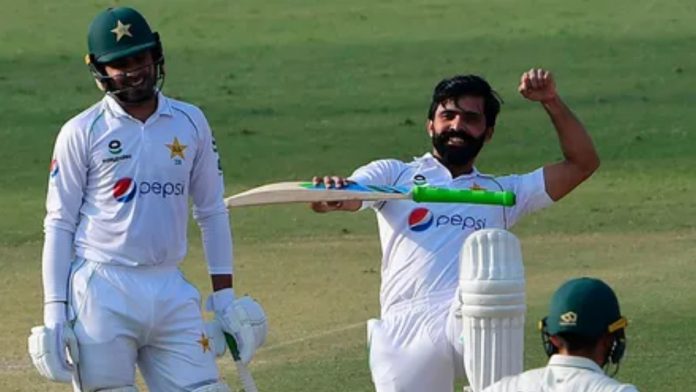 Azhar Ali and Fawad Alam hit battling half-hundreds of years on Wednesday to lead Pakistan’s opposition against SA on the second day of the initial Test in Karachi.

Fawad was holding stronghold on 63 as Pakistan arrived at 178 for six at tea, following South Africa’s first innings absolute by 42 runs.

Playing his first Test at home, Fawad was unshakable as he added 94 with previous captain Azhar for the fifth wicket, leaving South Africa (SA) without a scalp in the main meeting.

The other batsman at the wrinkle was Faheem Ashraf, who was at this point to score.

South Africa’s speed and turn assault worked hard after the hosts continued on a shaky 33 for four.

Must Read: Azhar Ali Encourages Youngsters to Show Their Worth at Home

Pakistan added 71 in the primary meeting before spinner Keshav Maharaj got through by dismissing Azhar, captured behind by Quinton de Kock.

Wicketkeeper Mohammad Rizwan and Alam added another 55 for the 6th wicket before the previous was gotten at sneak off paceman Lungi Ngidi.

It was a hard going for South Africa in the primary meeting.

Kagiso Rabada, who took two wickets for only eight runs late on Tuesday, glanced compromising in his six-over spell, however Azhar and Fawad batted mindfully to take Pakistan past 100.

Fawad was dropped on 35 by Dean Elgar, who neglected to hold a sharp edge off-spinner Keshav Maharaj in the slips.