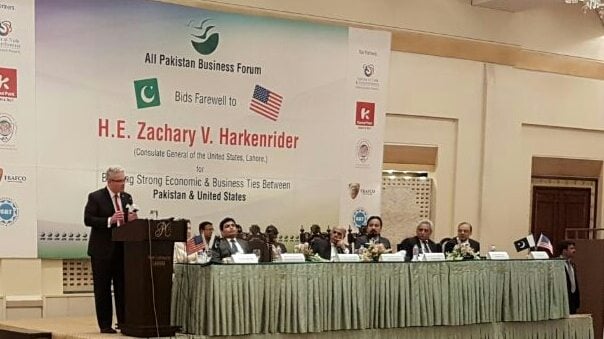 The All Pakistan Business Forum (APBF) arranged a grand farewell dinner to honor the out-going Consul General of the United States in Lahore – His Excellency, Mr. Zachary V. Harkenrider (Zach). The august ceremony was chaired by the Governor of Punjab – His Excellency, Mr. Rafiq Rajwana. The sumptuous feast was followed by a colorful evening of cultural performances. The event was graced by a large number of distinguished personalities and senior officials from the public and private sectors.

The Governor of Punjab – Malik Muhammad Rafique Rajwana was the chief guest on the occasion. Addressing the high-profiled gathering he stated that; “I would personally like to thank the out-going Consul General of the United States in Lahore – His Excellency, Mr. Zachary V. Harkenrider, and appreciate his dynamic efforts during his 3 year service in Pakistan. This highly accomplished diplomat has played a key role in initiating crucial dialogues and developmental programmes in Pakistan, with the valuable support of the U.S. Government.” 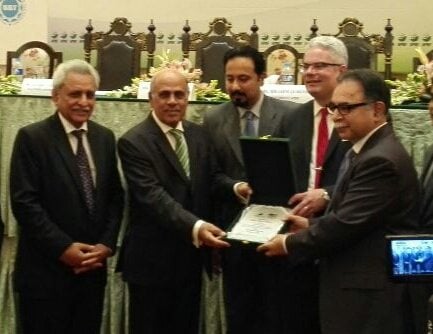 The President of APBF – Mr. Ibrahim Qureshi paid a rich tribute to Mr. Harkenrider, admiring his outstanding services towards strengthening the friendly relationships between Pakistan and the United States. He also thanked the Governor of Punjab for gracing this occasion. He stated that; “It has been a privilege for the APBF and myself, to have worked with such a seasoned and sincere envoy, representing the U.S. government in Pakistan as he extended all possible support to the business community, to enable faster growth of bilateral trade and attract foreign investments in Pakistan. His inspirational initiatives will also go a long way to ensure development of education and health services in Pakistan. The APBF wishes him best of luck for all his future endeavors.”

Mr. Zachary Harkenrider expressed his pleasure on the successful completion of his tenure in Pakistan and appreciated the great support provided to him by the vibrant business community and government sector of the country. He said that “APBF members” are action-oriented and entrepreneurial – just the sort of partners that Pakistan’s friends in the international community seek to work with, on our shared goal of promoting economic growth and prosperity.” He further stated that; “the President of APBF Mr. Ibrahim Qureshi has work hard to promote a more realistic and positive image of Pakistan among international investors.”

Mr. Harkenrider has been serving as the U.S. Consul General in Lahore, since May, 2014, and will soon recently conclude his highly successful tenure. He is a career member of the U.S. Foreign Service with over a decade of experience in various developing and post-conflict countries. From July 2013, Mr. Harkenrider served as Deputy Political Counselor at the U.S. Embassy in Islamabad, where his work focused on the U.S.-Pakistan Strategic Dialogue and Afghanistan policy, to ensure regional peace and stability. Prior to that, Mr. Harkenrider has successfully completed important diplomatic assignments in Sudan, South-Sudan, Afghanistan, Niger, India, etc. He is a recipient of; the Departments of State and Labor’s “Award for Excellence in Labor Diplomacy 2007”, two Superior Honor Awards, two Meritorious Honor Awards, and a Sinclaire Award for Excellence in Dari (Afghan) Language.

The Governor of Punjab also admired the achievements of the APBF President – Ibrahim Qureshi, who has helped many higher education institutions, including the prestigious University of Management and Technology (UMT) – Lahore, the Governor admired the role of Hassan Shoaib Murad ,Rector UMT to create synergies with leading American Institutions like; George Mason University, to raise the standard of education and professional training in Pakistan. Under a grant funded by the U.S. Embassy in Islamabad. GMU and UMT will work towards faculty-development and teaching-excellence. UMT and GMU are collaborating on other programs to train professionals, traders and SME owners in Pakistan, as well as offering workshops on “Counter-Terrorism for Infrastructure Protection”. Another grant has been arranged from National Science Foundation to promote renewable energy with the help of experts from Texas Tech University. Collaborations have also been created with the New York University and University of Pennsylvania. The Governor also appreciated Mr. Qureshi’s other brilliant initiatives, like the “Institute of Trade and Competitiveness” – aimed at strengthening Pakistan’s declining exports and control the rising trade deficit, by aligning Pakistani businesses with global supply and demand, to and supporting the young entrepreneurs to sustain and grow.

The APBF is a vibrant business association which promotes and protects the interests of the business community and a wide range of industries in Pakistan. Its membership represents a diverse mix of industries, services and trades. The forum also advises reforms to the Government sector, regarding policy formulation, regulatory realignments and implementation in the commercial and industrial sectors of the economy. Over the years, APBF has been consistently playing a positive role in elevating the standards of professionalism, global engagement and transparency to enhance Pakistan’s share in the world of business, to ensure better quality of life for its citizens.

Sophia the robot needs your help for her brain

The 6 legendary Games of Xbox of all times