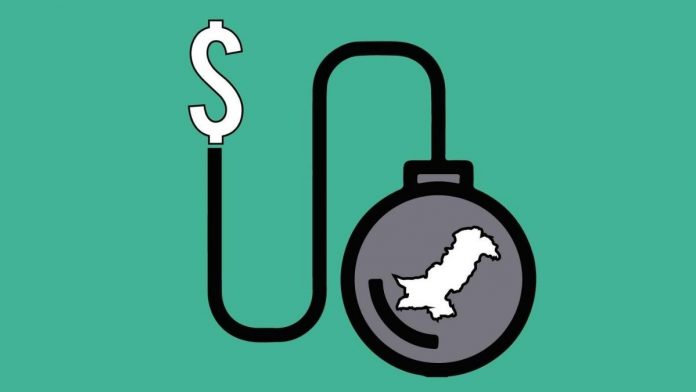 Pakistan received a total of $10.662 billion in external inflows from more than one source during the fiscal year of 2019-20 against the whole budgeted estimates of $12.958 billion as far as the entire fiscal year goes : this representing 82 percent of the amount.

In accordance with what the official data of the Economic Affairs Division (EAD) has to say, the external inflows during the same period of 2018-19 were in fact $10.595 billion – a figure which goes on to represent around 109 percent of the annual budgeted amount totaling to that of $9.692 billion.

It’s important to remember that the gap which so apparently exists between the budgetary target of in and around that of  $13 billion and that of the actual inflows which are figured at $10.66 billion happens to be courtesy of the fact that the government was unable to issue Eurobonds of $3 billion for the sake of international capital markets.

As Covd-19 continues to be a menace all across the globe as well as in Pakistan, the disbursements of project aid which were there courtesy of development partners were subject to being dried up over the course of the very last quarter of the fiscal year 2019-20. Indeed not only has the pandemic been responsible for a health care crisis, but it has also gone on to force the closure of most of the economic activity that was carried out within the country – this in turn led to the slowing down of development projects. Now though, adopting a more optimistic approach wouldn’t be the worst idea due to the fact that the ease in lockdown by the government may lead to an increase in project financing over the course of the next few months.

The government proceeded on to budget foreign assistance of $12.957 billion for the fiscal year 2019-20 including $2 billion which made their way as a result of commercial loans. The data went on to reveal that the government took upon itself to procure $3.373 billion from foreign commercial banks in 2019-20 in comparison to the $4.097 billion during that of 2018-19 : this representing in and around 32 percent of the total external loans that totaled up to that of $10.662 billion procured during that of 2019-20.

Must Read : Loan Deals Signed Between Pakistan And World Bank

In accordance with EAD, the total receipt of $10.662 billion follows through with $4 billion or indeed 37 percent coming in as program/budgetary support assistance from Asian Development Bank and World Bank, $3.373 billion which represents 32 percent following through from commercial borrowing, $1.694 billion (16 percent) from that of project assistance and finally, the remaining 15 percent amounting to that of $1.583 billion coming in as a result of commodity financing.

Both bilateral as well as multilateral development partners too have made their way within the whole process as they have disbursed $6.521 billion of foreign economic assistance over the course of the last fiscal year in 2019-20 against of course the budgetary allocation constituting to that of $4.758 billion for the fiscal year 2019-20.

With regards to the multilateral development partners, ADB was responsible for providing $2.824 billion including that of ADB’s budgetary support loans which in itself amount to that of $2.3 billion so as to address the fiscal imbalances that currently exist, as well as ensure macroeconomic stability and also secure financial sustainability in the country. The Islamic Development Bank moved forward to disburse $815 million under the oil credit facility out of the $1.1 billion which was budgeted for the fiscal year 2019-20.

The World Bank too got into the act as it parted way with a total of $1.376 billion against the budgetary allocation which showcased itself to be & 1.163 billion. The leading donors stemming from the source included the likes of China, the UK, Korea, the US and also : Saudi Arabia – with oil rich country parting way with the same.

While Pakistan has indeed been on the receiving end of substantial amounts of loan – this doesn’t come as news as the same has been the case for the country over the course of the past many years.

With a struggling economy and currency that is constantly being devalued, one can argue that little can be done without the aid of loans. However, considering the fact that a massive deficit within the country’s Balance of Payments already exists – the factoring in of loans will not at all make the situation any better. Though investments within capable industries as well as ventures might reap sustainable rewards which might at the end of the day mean that the economy stabilizes and hence the loans repaid – whether this happens however, we can only wait and see.