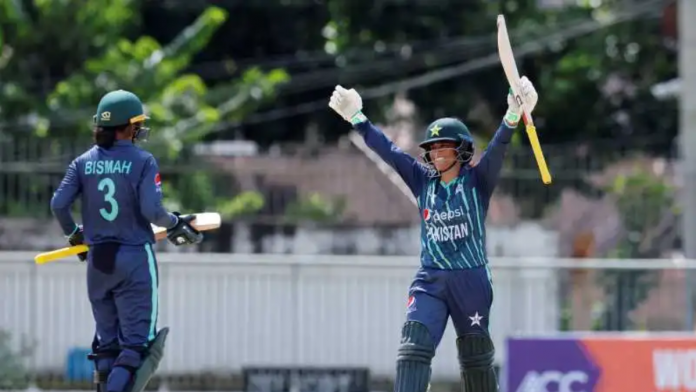 Pakistan finished top of the women’s T20 Asia Cup league round standings following a win over the hosts Bangladesh with nine wickets in the Sylhet International Cricket Stadium on Monday.

This was the team’s second consecutive win after they began their campaign by beating Malaysia by a similar margin.

Pakistan hit in the early stages when Pakistan captain Bismah Maroof won the toss and then put Bangladesh into the batting when batsman Diana Baig cleaned up opener Shamima Sultana.

The batsmen were handed over to the Pakistan spinners following that, after that, with Nida Dar Omaima Sohail as well as Sadia Iqbal sharing 4 wickets among the trio. Diana was able to take another wicket to limit their hosts down to 70-8 after 20 overs.

Pakistan opening batsmen Muneeba Ali as well as Sidra Amin got their team off to a an impressive start, scoring 40 runs on the powerplay with the aid by five boundary. They combined for the team with nine more scores before Muneeba was left behind by Saima Khatun to score 14 of 19 (one four).

Sidra was able to take Pakistan through the line the likes of Bismah (12 still not out) He was unbeaten after returning in the 36th over 35 in an impressive knock that contained four boundaries. The right-hander was adjudged to be the best player of the game.

In a second match, India beat Malaysia by 30 runs using the D/L method after they scored 181-2. But the game be canceled due to rain . Malaysia at 16-2 just two balls into the sixth over.

India are on the same level with Pakistan however, they are ranked second due to a difference in net run-rate.