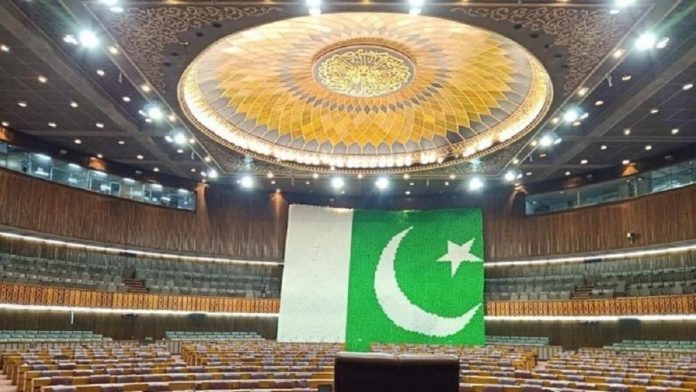 So it is official, Pakistan has set yet another world record to make the people of Pakistan feel pride. The Guinness World Records has officially recognized Pakistan as the official record breaker and the current record holder for the largest national flag ever made by balloons. The country has faced some setbacks in its 75 year old history so record such as these really set the mood for the nation’s people to feel pride to be part of this glorious nation.

Another keynote of the whole setup was the fact that minority groups in Pakistan showed their utmost respect, loyalty and above all love for the nation. The Pakistan Hindu Council (PHC) had set up the 40 feet long and 60 feet wide flag using approximately 60,000 green and white balloons last year in the National Assembly hall to mark the Independence Day. Yesterday, after one whole year, PTI lawmaker, Ramesh Kumar, presented the Guinness World Record certificate to the Speaker National Assembly, Asad Qaiser.

The speaker applauded the great work done by the Hindu community for their dedication towards achieving the amazing milestone, while he also lauded the role minority groups play in taking Pakistan upwards in the eyes of the global community. Such efforts shows the principles on which Pakistan was shaped, to not only respect minorities in our nation but to also give them equal opportunity and representation, that while Pakistan may be an Islamic state, minorities can not be overlooked and can not be considered disloyal or lesser than any other.

Must Read : Govt Unsure Over How to React to UAE-Israel Deal

The speaker said, “This is an expression of affection and bonding of Hindu community with the country. The entire Pakistani nation pays regards to their sentiments and love”

Furthermore, he was hopeful that the minorities of the country will continue to play an important role in the overall  progress of the country in the times to come. While attributing the feat to the people of Pakistan, Ramesh Kumar said it was his longstanding wish to create the national flag using balloons in the National Assembly hall on Independence Day and to dedicate it to the people of this great nation, our love and our pride, Pakistan.