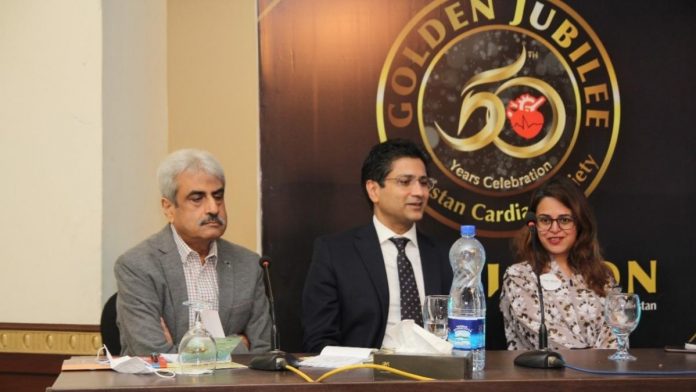 Cardiovascular diseases continue to have a significant impact across the world among different populations. To address the issue of the rising health burden of ASCVD in Pakistan, Getz Pharma Pvt. Ltd and Tabba Heart Institute (THI) formally launched PAK-SEHAT- Pakistan Study of Premature Coronary Atherosclerosis in Young Adults, a nationwide study conducted through Pakistan’s first state of art mobile lab. PAK SEHAT project is the largest, first-of-its-kind, longitudinal cohort study on Atherosclerotic Risk Assessment in Pakistani Population. This 10-year joint venture of Getz Pharma &THI (PAK SEHAT) will help determine risk factors for coronary heart disease so that early detection can be done and disease can be prevented rather than treated.

Cardiovascular disease (CVD) is one of the leading causes of mortality worldwide, causing approximately 32% of annual deaths. The risk of cholesterol-associated CVD varies among different ethnicities; however, the risk is four fold in the South Asian (SA) Population compared to other races. Furthermore, almost 75% of all CVD deaths are in low and middle-income countries (LMIC), where there are finite health resources and a multitude of health-seeking barriers.

The state of heart diseases in Pakistan also reflects a concerning picture. According to the World Health Organization data published in 2018, coronary heart disease deaths in Pakistan reached 20% of total deaths, and Pakistan ranks 18 in cardiac mortality in the global ranking. Moreover, the numbers of potential CVD risk factors, including hypertension and diabetes, are also alarming in Pakistan, with 50% hypertension and 17.1% diabetes in the adult population. There is a drastic shift in CVD occurrence in young ages in the SA population, as evidenced by the groundbreaking INTERHEART study suggesting 10.6% of SA participants presented with a heart attack at <40 years of age. Therefore, this study primarily envisions screening the Pakistani individuals at a younger age to prevent increasing CVD burden in the future.

This study aims to recruit healthy volunteers <40 years of age, from selected urban and rural areas of Pakistan, who are asymptomatic and have no cardiovascular disease. This would allow for assessing the participants’ risk factor profiles and follow them up for at least five years to document the incidence of ASCVD. The objectives of PAK SEHAT includes: