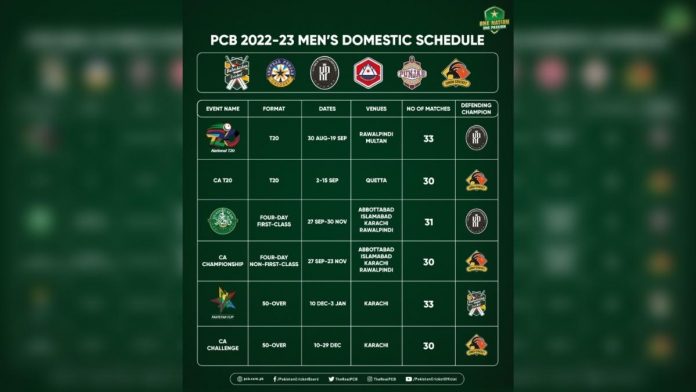 The streamlining of pathways for cricket and the creation of more opportunities to play for cricketers who are talented was the main goal of the cricket board’s Pakistan 2022-23 domestic cricket season that was unveiled today.

The senior cricket season will begin with the two-leg match of 33 matches National T20, which will take place at Rawalpindi and Multan between the 30th of August and 19 September. In parallel, the 2nd XIs Cricket Associations Cup will be held in Quetta between 2 and 15 September.

The curtain for the 2022-23 national cricket season will begin during the 33-match Pakistan Cup 50-over tournament, which will be held in Karachi between 10 December and 3 January. Karachi will also host an event called the Cricket Associations Challenge from 10-29 December.

In total 187 matches are planned to be played in the course of 127 consecutive days (30 August to January 3).

Some of the key aspects that are part of the PCB 2022-23 cricket men’s domestic calendar include:

Director High Performance Nadeem Khan: “Making the domestic events challenging and competitive, as well as providing the maximum opportunities for our talented cricketers to showcase their talents and assist them in their progression to the next level was the core of our process of thinking when we finalised our domestic calendar.

“Last season, we permitted every Cricket Association to field two teams under 19 for the National tournaments. This year, we’ve increased the number of games in the 2nd Third XI CA Cup, Championship and Challenge. Each player will be playing the chance to play at least 10 times in all three formats that’s a great opportunity for players to display his strength and potential, as well as make a mark to the first XI tournaments.

“We have created a new approach whereby the non-first-class CA Championship matches will be four-day matches. This will ensure that matches are highly competitive and result-oriented and the players will have an chance to get the most out of these games. It will also assist in reducing the gap the Quaid-e-Azam Trophy, a first-class competition where only the very best of the best play.

“We have also worked to simplify the process of player development and advancement. A skilled U19 cricketer won’t need to wait until next year to play in the senior competition. I am certain that this year we will witness a handful of exceptional U19 cricketers from these tournaments. CCA, CA and National tournaments which will play in the top events, since the routes events have been created to connect with the main tournaments.

“Last year, young Mubasir Khan from Northern as well as Balochistan’s Haseebullah were deemed to be the top players in the Quaid-et-Azam Trophy as well as the Pakistan Cup, respectively. It was very gratifying to the PCB to see these youngsters taking the stage and winning these events. This was not just a reflection of the talent of our nation, but also reflected the excellence of our tournaments.

“I believe that many youngsters will earn their mark in the coming tournaments that, will in turn, help to expand the pool of National team’s bench athletes.” 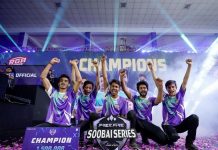 Zimbabwe to Play Against Pakistan Soon, But Without Head Coach