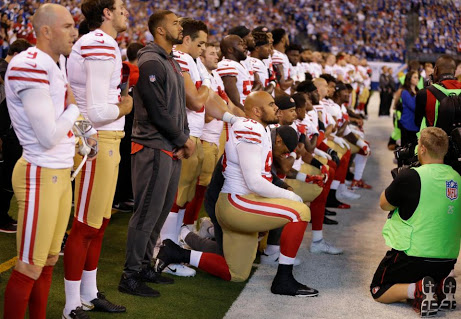 That’s how Mike Pence shows his love for his country’s soldiers and flag when he walked out of the National Football League ( NFL ) game due to the refusal of several players for standing honouring the UK National Anthem.

US Vice-President Mike Pence says that he abandoned the game because kneeling during the anthem us disrespectful behaviour to their soldiers.

When players refused to stand for US national Anthem at NFL games in a protest against racial injustice.Mike abandoned the game in his home state of Indiana saying he could not be present at an event where people disrespects his soldiers and flag. 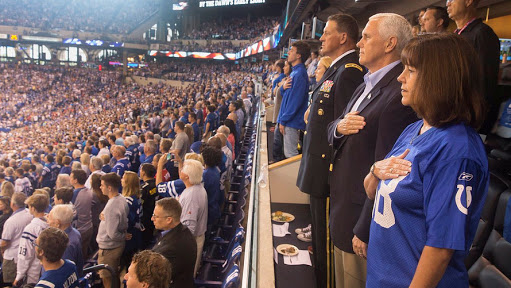 Colin Kaepernick first stirred controversy last year when he knelt for the anthem to highlight the treatment of black Americans following a series of police shootings.

Mike’s media pool was told about the vice-president’s expected exit from the occasion. Shortly after that, it was confirmed that he left the event.

President Donald Trump also claims through a tweet that he had asked Mr Pence to leave if players kneeled. He also said he was “proud of him”.

Trump criticized the players sharply and pressed the NFL to ban the players who kneeled at the time they had to stand.

But a few NFL players got irritated by what they saw as a political publicity stunt.

Americans are already split according to polls and are not happy about the NFL protests but they also dislike Mr Trump’s eagerness to fuel the fire of controversy.

Now when tensions are rising in North Korea and yet another hurricane slams into the US – Mr Pence is doing what irritates the people.

“I left today’s Colts game because @POTUS [President Trump] and I will not dignify any event that disrespects our soldiers, our flag, or our National Anthem,”.

He travelled quite ways starting from Nevada to Indianapolis then back west to California just to make a statement.

There is a doubt that vice-president would not be present at the NFL games event even though he has earlier tweeted that he would be attending the event.

The questions are being raised asking if that statement was worth the vice-president’s time in addition to the question that how much that trip cost US taxpayers?

However, Trump’s supporters are celebrating the move and helping the vice-president brighten his standing with his boss’s loyal base.

“While everyone is entitled to their own opinions, I don’t think it’s too much to ask NFL players to respect the flag,”.

Previously, Mr Trump has said that his comments that condemn the NFL protests have “nothing to do with race”.

But what his criticism means is known to all.

Since the start of kneeling by Kaepernick, more and more public figures have been “taking a knee” at big events and are using the hashtag #TakeAKnee on social media in the US.

edenrobe launched their fragrance under the banner of “edenrobe beauty”!