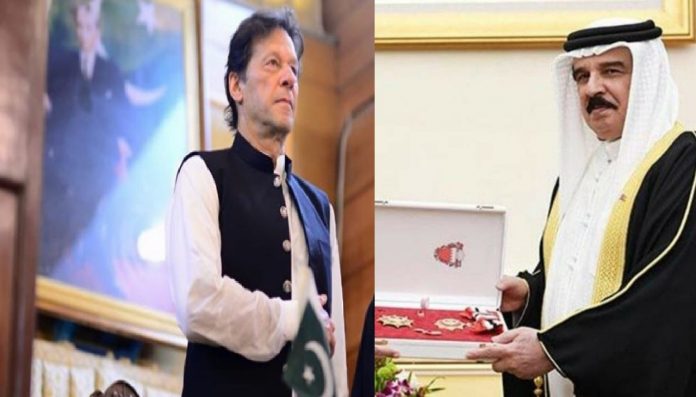 Prime Minister Imran Khan will receive the highest civilian award by the Bahraini King. The award will be presented on the upcoming PM’s visit to Bahrain on December 15. The news was confirmed by the Special Assistant to Prime Minister on Overseas Pakistanis Syed Zulfi Bukhari.

PM Khan will be honored with the King Hamad Order of the Renaissance in a special ceremony during his tour. He is also set to participate in Bahrain’s national day celebrations. The Bahrain visit would be the first leg of the three nation tour to Geneva and Kuala Lumpur. The PM will attend an international conference on refugees in Geneva, Switzerland, after which he will travel to Malaysia in the last phase of the tri nation visit.

A senior official of the Bahrain government, during his visit to Islamabad in August, had extended an invitation to Khan on behalf of his Bahraini counterpart.

Earlier, the highest civilian award was awarded to PM Narendra Modi. Soon after India revoked the controversial article 370 which annexed the disputed region of Jammu and Kashmir with India. The move angers the whole Pakistani nation including Muslims all around the world.

The Prime Minister will brief the King about the situation in Kashmir.

In the last stop of the visit, the PM will attend the first Kuala Lumpur Summit from December 18 to 20 in Malaysia. The Summit will be attended by Indonesia, Turkey, Pakistan and Qatar in addition to the host nation Malaysia. The theme of the Summit is ‘The Role of Development in Achieving National Sovereignty’.

Rollable devices are expected with Samsung as giant’s next-generation

Huawei smartphones get an increase in price