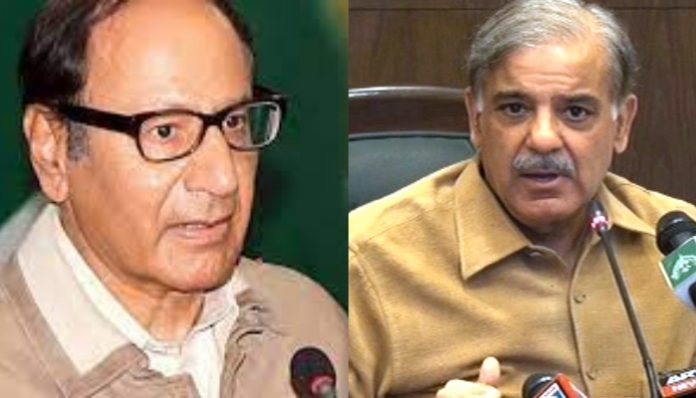 Prime Minister Shehbaz Sharif visited Pakistan Muslim League-Quaid president Chaudhry Shujaat Hussain’s residence in Islamabad on Wednesday. The visit was apparently to discuss the upcoming by-elections for 20 seats in Punjab Assembly, and the fiscal budget 2022-23 that will be announced Friday (June 10).

According to the Prime Minister Office PM Sharif met Shujaat along with Pakistan Muslim League-Nawaz leaders (PML-N), and inquired about him.

Dawn was informed by an insider in the PML-Q that the premier had offered to the PML-Q chief to contest the by-polls scheduled for July 17. The source said that the PM wanted both parties to field joint candidates for Punjab in the next general election.

Farrukh Khan, PML-Q MNA, was also present at the event. It is possible that she will also be joining the federal cabinet within the next few days.

The PMLQ currently has two factions. One supports the incumbent government, and the other is led by Chaudhry Paravez Elahi who stands with the PTI. Shujaat, however, denied that there were any family rifts. Shujaat was quoted saying, “Being the family elder I still make all decisions.”

The PML-Q chief presented budgetary recommendations to PM to help alleviate the inflation-stricken masses and aid overseas Pakistanis. This included free transport of the bodies through Pakistan International Airlines.

He offered his full support to the PM, and hoped that he would rid the country of all its crises.

Shujaat was told by the prime minister that two PMLQ federal ministers, Tariq Bashir Cheema (Housing Minister) and Chaudhry Sulia Hussain (Board of Investment and Special Initiatives minister), were honest and hardworking members of his cabinet.

According to media reports, Punjab Chief Minister Hamza Shehbaz called Asif Ali Zardari, leader of Pakistan Peoples Party, at Bilawal House, Lahore on Tuesday. The two leaders agreed that they would contest the forthcoming by-elections together.

25 members of the Pakistan Tehreek-i-Insaf had been removed from their seats by the Election Commission of Pakistan. They were deposed for supporting Hamza in the CM’s election. The CM’s position appears to have been weakened following their departure from the provincial assembly.

Wheat flour to KP: In the meantime, Marriyum Aurangzeb, Information Minister, claimed that Prime Minister Sharif had kept his promise of providing flour at a discounted rate to the people in Khyber Pakhtunkhwa. The commodity was being sold at Rs40 per kg.

Also Read: Economic Survey 2021-22 to be unveiled on Thursday

She exclaimed, “The provision at a discount price of flour to the peoples of KP will been ensured at PM’s signature Shehbaz Speed.”

100 mobile shops were launched to facilitate the effective implementation of the PM’s initiative. She also announced that the province was divided into two zones, Abbottabad (or Peshawar) for this purpose. She assured that the systematic supply of flour at a reduced price would gradually be extended to all parts of KP. She claimed that more than 50,000 bags have been sold through mobile shops in these two areas.

Minister said that the number of mobile stores will be increased to 200 by June 13, so that more KP residents can benefit from the reduced flour.

Temporary flour-selling points will also be available in the province as of today, June 9, and they will increase to 500 by June 17, to facilitate the process.

Ms Aurangzeb stated that, in keeping with PM Shehbaz’s vision and promise, there would be over 2,000 selling points in KP located at 993 locations where people can buy low-cost flour.

Queen’s Jubilee Ceremony: Prime Minister Sharif later stated that the government was determined to strengthen bilateral relations between Pakistan and the UK in various fields, including trade and investment.

As chief guest at Queen Elizabeth II’s 75th coronation ceremony here at the British High Commission in London, Mr Sharif spoke out about his recent telephonic conversation on strengthening trade and economic collaboration with Boris Johnson. He said: “We expect a trade delegation to the UK very soon.”

According to the PM, the Queen’s 75th coronation year coincided with the platinum independence anniversary of Pakistan and the 75th anniversary Pakistan-UK diplomatic or friendly relations.

Christian Turner, British High Commissioner, spoke out about the close relationship between Pakistani and British diplomats and promised to work to strengthen them.