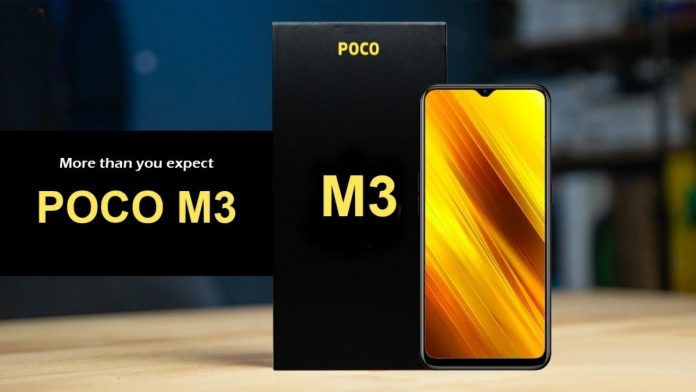 After the successful launch of their flagship and mid-range lineup of smartphones this year, Xiaomi’s subsidiary brand of smartphones, Poco phone is turning the pace on as they plan to grad more attention of potential consumers as they step in to market for entry-level phones. As many would expect, the Poco M3 has in turn left consumers absolutely speechless as the new phone costs the user just $150 but brings on the table, a 1080p display, a massive battery, a 48MP camera setup, and many more amazing features, given the price of the phone.

In addition, the Poco M3 comes with a fairly unique design at the back with quite a large Poco branding which sits beside a triple camera setup. This design was also seen on the OnePlus 8T Cyberpunk 2077 Edition, so one would assume that folks at Poco, picked up the design from there. As far as the face of the device is concerned, the new phone features a 6.53-inch LCD which come with FHD+ resolution along with a waterdrop notch which has a front camera embodied in to it. In terms of the screen to body ratio. The phone has a percentage of over 90% which is because of the razor-thin bezels found on the device.. As far as the biometrics and security is concerned, users can access their phone with a fingerprint sensor which is mounted on the power button on the side.

Instead of opting for the traditional Snapdragon 400 series SoC, or a Helio P35, users will get a mid-range standard Snapdragon 662 SoC which easily outperforms the Snapdragon 665. In addition, users will also get 4GB RAM coupled along with  128GB UFS 2.2 storage, which is pretty amazing to see, considering the entry-level price of the phone. On the software front, users will get Xiaomi’s latest UI, the MIUI 12 on top of Android 10.

In terms of the camera capabilities of the device, on the back, the main sensor is a 48MP which comes along with two additional lenses which will give users the experience of macro photography and depth sensing. The camera setup is loaded with features such as Night Mode, Portrait Mode, Time Lapse, and Movie Frame for cinematic shots. This camera can record videos in 1080p resolution. The front-facing camera housed in the waterdrop notch is a 8MP shooter.

In terms if the battery, users will be amazed to find out that the device comes with a massive 6,000 mAh battery pack which also has support for 18W fast charging as well as reverse charging to help charge other devices, which makes the phone a very attractive buy and considering the price of the phone is just $150, one would not think twice before investing in such a phone.

Honor’s new device can help you check your body temperature