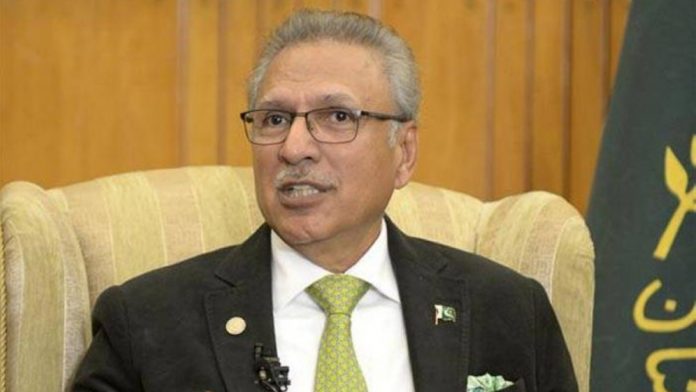 President Dr Arif Alvi, on Sunday, dissolved the National Assembly on Prime Minister Imran Khan’s recommendation in accordance with Article 58 of the Constitution.

In the early hours of today, Prime Minister Imran addressed the nation in a speech at the national level, mentioned that he had advised President Alvi to “dissolve assemblies“.

The announcement of the premier came just following National Assembly Deputy Speaker Qasim Suri, who chaired the current session, dismissed the no-confidence motion brought against Imran Khan as the Prime Minister and called it a violation to Article 5 in the Constitution that states that dedication toward the nation is the primary obligation of all citizens.

The government says that the no-trust move against him was an “foreign paid conspiracy” in reference to a “threat letter’ which was delivered by a different nation through Pakistan’s ambassador. It asked to remove the PM Imran.

In his speech today the Prime Minister Imran expressed his gratitude to the people of the country for the motion to end trust being rejected and said that the deputy speaker had “rejected the idea to alter the regime [and an international conspiracy”.

The premier stated that he’d received numerous messages from people concerned and worried, noting it was “treason” is being committed before the nation. “I want to say ‘ ghabrana nahi hai‘ (do not worry). God watches over Pakistan.”

He stated that he had written to the president Alvi with a suggestion for dissolving the assembly noting that the democrats must be able to go to the people and that elections be conducted so that the voters could decide who they want to be to be in charge.

“Prepare for elections. The absence of corrupt forces will determine how the destiny of the country will look like. If the assembly is disbanded, the process for the next election and the caretaker government will start,” he added.

In the following days shortly after, Information Minister Fawad Chaudhry stated that the prime minister’s recommendation for dissolving the National Assembly had been sent to the President Dr Arif Alvi in accordance with article 58 in the Constitution.

In a tweet of his own, he claimed that the cabinet had been disbanded and the PM Imran will remain in office according to Article 242 of the Constitution that is linked to by-elections and elections.

As per the report following the dissolution NA the president, after collaboration with the premier and chief of opposition would nominate a caretaker prime minister.

It also adds: “When the National Assembly or the provincial assembly dissolves and a general election for the assembly will take place within a time of ninety days following the dissolution. The results of the election must be announced no more than 14 days after the end of the election.”

The the Minister of State Information and Broadcasting Farrukh Habib announced that elections will be held within 90 days.

In the early hours of today Information Minister Chaudhry took to the stage within minutes following the NA session started, stated his loyalty to state is the primary obligation of all citizens under article 5(1). He confirmed his earlier assertions that there was a foreign conspiracy behind the decision to remove the government.

“On March 7, our diplomat was invited to a gathering that was attended by representatives from other nations. At the meeting, it was announced that a motion to defy Imran the Prime Minister Imran was being discussed,” he said, noting that it happened one day before the opposition officially filed the no-trust motion.

“We were told that the relations with Pakistan were contingent on the outcome of the motion to no-confidence. If the motion fails, Pakistan’s road ahead would be extremely difficult. This is a plan to effect the change of a regime by an outside regime,” he alleged.

The minister was unsure of what the reasoning behind this move and urged the speaker’s deputy to determine whether or not the no-trust decision is constitutional. decision.

Suri who presided over the meeting after opposing parties in an unexpected move, filed a no confidence motion to impeach Speaker Asad Qaiser. Suri said the motion was made on March 8 and must be in line with the law and Constitution. “No foreign power is allowed to take over the elected government by the use of a plot,” he said, noting that the arguments made in the motion by Minister Suri had been “valid”.

The motion was rejected by the judge by ruling it “contradictory” in accordance with the law as well as the Constitution and the rules. The session was then adjourned.