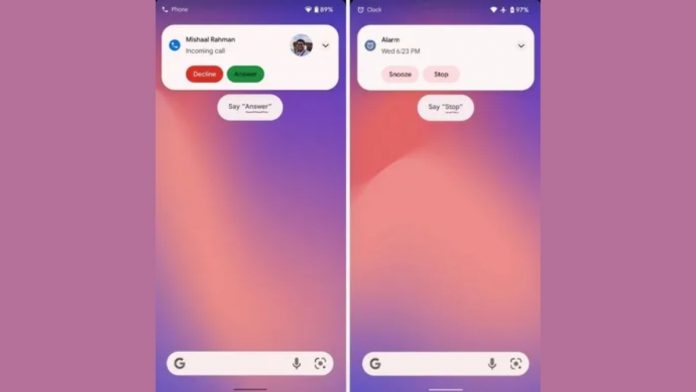 The Google Assistant will soon be on the receiving end of a new update which will enable its users to use certain words so as to interact with the assistant without there being the need for saying the “Hey Google” voice activation command.

In accordance with what the latest reports suggest, the search engine giant is indeed working on “Quick Phrases” feature, which has in fact been spotted on a Google Pixel 3 XL which happened to have been running the Android 12 Beta. As of right now, it isn’t quite known whether or not Android 12 is an actual requirement for this new feature. Regardless of the requirement argument, the Quick Phrases feature needs to be activated in the Assistant settings. After it is indeed turned on, the assistant would listen to certain phrases – all depending on what situation it finds itself in.

For example, users would actually be able to turn off an alarm simple by saying “stop” or “snooze”. This would be done without there being the need for saying “Hey Google” first. In a much similar vein then, you will also have the opportunity to answer calls just by saying “Answer” or reject a call by saying “Decline.” Other reports have also gone as far as giving out a list of other and similar commands that are also believed to be a part of these quick phrases. This includes command such as “Cancel the alarm,” “send a broadcast” etc etc.

Many people found the requirement saying “Hey Google” first a tad bit annoying, so this new feature does indeed make a lot more sense. Not only this, but it is also likely to persuade more people to actually make use of the Google assistant, because the use is now simpler than before. So we shouldn’t at all be surprised if the use of the Google Assistant gets more and more as time now progresses.

Get ready to “Be Light”, Infinix INBook X1 series announced in...