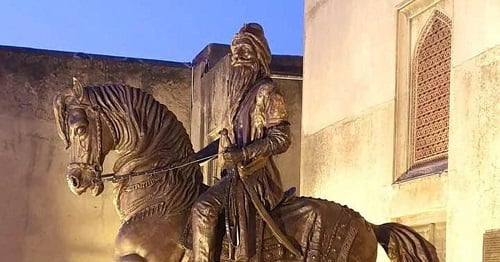 Shahi Qila is home to the grave of Punjab’s historical leader Raja Ranjit Singh who was so brave that even the British waited for his death to takeover Punjab. His importance in history of Punjab is undeniably great and therefore a status was made in his remembrance in the Shahi Qila near his grave.

A vandalization attempt has left the statue damaged. According to management at the Shahi Qila, the monument was open for visitors when two men, one claiming to have a leg disability carrying a wooden rod and another “helping him to walk” entered the Qila. Both men then rushed to the statue and started hitting it with the rods damaging and breaking its aim. The men were then captured by the security as they chanted slogans against the former ruler of Punjab.

Must Read: Full Specifications of the Xiaomi Mi 9 5G revealed by TENAA

Later, it was known that the vandalizers were of the view that in a Muslim country there shouldn’t be statues of people and threatened that they would repeat the act if the authorities didn’t deal with it.

The statue of Ranjit Singh was unveiled in Lahore Fort, at the Mai Jinda Haveli, on June 27, the Warrior’s 180th death anniversary as a symbol of how Pakistan is a country which cherishes its history and not only the history concerned with Muslims but also of other religions. The nine feet tall statue, made of cold bronze, showed the regal Sikh emperor sitting on a horse, sword in hand, complete in Sikh attire.

Such cases present themselves as very difficult to resolve because extremism in people cannot be removed and majority of people in both countries have such beliefs which are the friction that cause the problems in relations between the two countries. A more compromising behavior towards each other would be a real building block towards better relations in the sub continent.