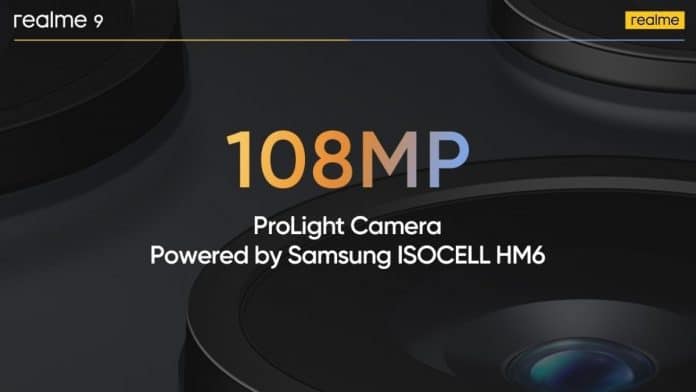 When purchasing devices in the mid-range, consumers have learnt to manage their expectations. Often times one would have to pick and choose between different smartphone options by making a compromise on certain features.

This dilemma has become a concern of the past due to realme’s commitment to providing high quality options in the mid-range segment. realme’s drive to innovate has brought many successes in the past such as with the realme 8 Pro which was the tech democratizer’s first 108MP camera smartphone. The previous generation number series phone made waves in the minds of the public owing to its stellar camera setup.

In modern times, a smartphone’s main camera has become one of the most important features of your device. Whether you want to snap a picture for social media or video chat with your loved ones, the smartphone’s camera quality is of paramount importance. This is why realme is bringing a new and improved 108MP ProLight camera setup in the upcoming realme 9 4G.

On the surface it may seem like the camera setup is the same as the realme 8 Pro but beneath the surface the realme 9 4G is the very first smartphone to come equipped with the brand new Samsung HM6 sensor allowing it to deliver superior results.

The advanced sensor also supports 3x lossless zoom which allows you to capture smooth and accurate images no matter how close or far from the subject you are. Apart from all these revolutionary features, the ISOCELL HM6 sensor is the first to adopt the Nonapixel plus technology. This upgraded pixel binning technology has drastically improved the way it combines and utilizes light information allowing it to take bright and clear pictures even in extremely low light environments.

The products of merging nine pixels at once are 12MP images with a noise level comparable to a 1.92μm big pixel. Smart-ISO allows the ISOCELL HM6 to adjust to the lighting conditions by intelligently choosing High or Low ISO mode. In conditions of dim lighting, High ISO mode converts light to a signal with higher conversion gain to illuminate details in the shadows.

The process of multisampling follows which combines High ISO and Low ISO shots to reduce noise by averaging multiple frames into one. The realme 9 4G’s ISOCELL HM6 sensor has four times more autofocusing agents than the previous 0.7㎛ 108MP ISOCELL model. With its higher autofocus pixel density, you can capture fast-moving objects easily with little to no loss of image clarity.

The ISOCELL HM6 is not just great at capturing photos, it can capture highly detailed videos as well. With support for video recording at 8K 24FPS and 4K 120FPS, the high-tech sensor allows you to record moving images in both regular and slow-motion mode in incredible detail.

By introducing the HM6 sensor to the market via the realme 9 4G, realme is building on its legacy of facilitating access to the latest in the tech world for its loyal consumers. This first of its kind tech makes low-light photography a piece of cake.

However, the realme 9 4G is much more than a glorified camera. The next-level handset also comes equipped with a Snapdragon 680 (6nm) processor, 90Hz Super AMOLED Display, Holographic Ripple Design, and so much more. So keep your eyes on store shelves for the realme 9 4G when it arrives starting Saturday, July 16, 2022.

Here’s everything you know about the Realme 10 series