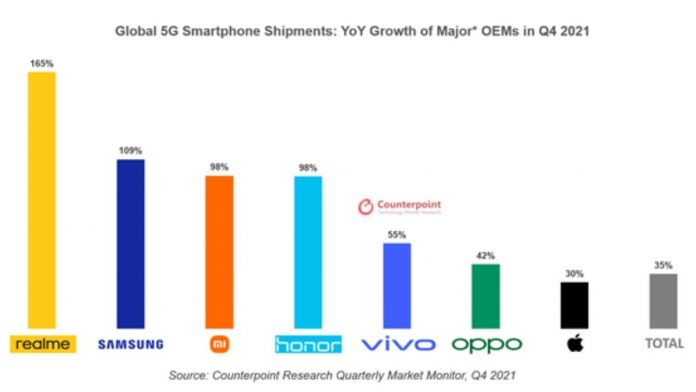 The 5G popularizer shows no signs of slowing down as it continues its takeover of the global smartphone market.

As the youngest among the world’s top 6 smartphone brands, realme has emerged as the fastest growing smartphone brand globally for the first time. Its robust and sustained growth has allowed realme to land a spot in the Top 5 in terms of 5G smartphone shipments across 20 global markets and enhanced its position as an industry leader in democratizing 5G.

According to the latest research report by Counterpoint, realme’s 5G shipments have experienced the most growth among all major smartphone brands with a whopping 165% YoY growth percentage in the fourth quarter of 2021. realme’s rapid growth has been fueled by the company’s expansion into Western European countries such as Italy, Spain, France, the UK, and Switzerland, in each of which it is the fastest-growing brand thanks to its multiple 5G-enabled smartphones as well as the GT series.

There are no doubts about realme’s performance outside of Europe as its 5G devices have also continued to perform well in regions such as the Middle East, North Africa, and Asia Pacific, which constitute a majority of the 20 global markets (including India, Bangladesh, Malaysia, Morocco, Myanmar and Singapore) in which realme’s 5G smartphone shipments rank among the top-five.

“This reinforces our dedication to work towards our ambition of becoming the Democratizer of 5G. As an emerging tech brand, realme has always been committed to encouraging young users worldwide to experience the latest technology like 5G and will continue to deliver appealing and future-ready devices to global fans” said Sky Li, Founder and CEO of realme.

To further the focus on popularizing 5G-enabled smartphones, realme has lowered the ASP of its Number Series 5G devices from USD 270/- in Q1 2020 to under USD 200/- in Q1 2022, while simultaneously offering more advanced 5G smartphone options with the more premium flagship GT Series in order to meet the needs of a more advanced set of users.

PHA partners with Bookme in a bid to digitize events through...