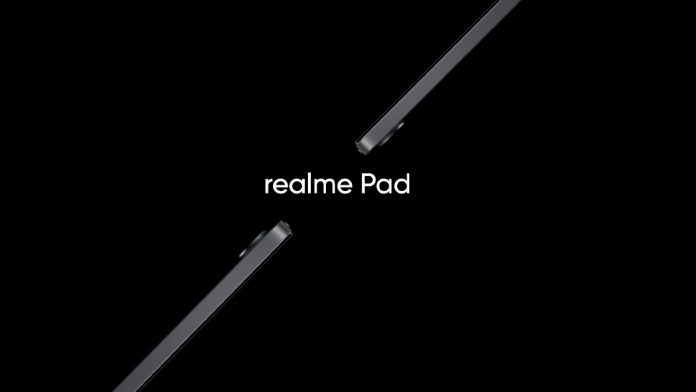 Chinese brand Realme will launch its first ever tablet this year and it will make way as the Realme Pad. The manufacturer has already given us an idea as to how the device will end up looking like courtesy of an official render however, a new set of Cad-based renders have surfaced and have provided us with even more details.

The Realme Pad will feature with a dial-tone finish as shown in the renders. The display is set to be bordered by equal-sized bezels while the edges of the frame are much similar to what is offered on the iPad Pro 11 – however, they aren’t as curved at the corners.

There also happens to be a single protruding camera placed on the back while a magenta line runs right from the top to the bottom. The line goes on to separate the two-tone finish of the back of the Realme Pad. The manufacturer’s name is also written in the very same magenta color at the bottom right corner.

The Realme Pad has its power button at the top, when in portrait mode and on the right side happens to be the volume rocker, two microphones and what appears to be a tray for the sake of an SD card. Also, this tray may indeed house a SIM if there is a version with 5G. The right bezel (in the portrait position) is also in fact where you have the front facing camera.

There also are present four speaker grilles, two placed on each side at the top as well as the bottom. Alongside the grilles placed at the bottom is a USB-C port and also a hole at the far left which has indeed been reported to be a slot for a stylus.

Xiaomi now ahead of Apple

Huawei Pumps-up its Y Series with the new HUAWEI Y6p and...