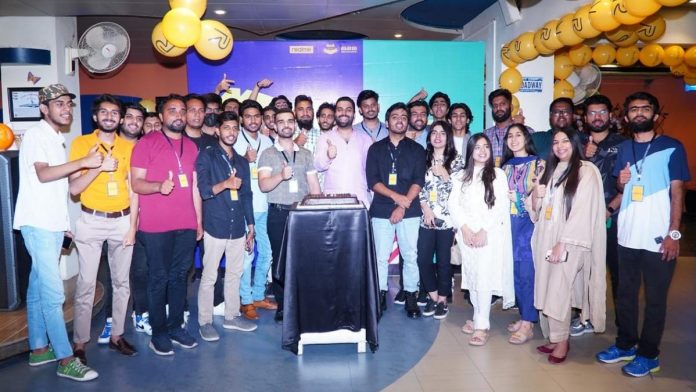 Behind every successful business there is an army of loyal fans lending their support for its endeavors. For realme, the strong presence of its fans has always been felt in every step of the journey to grow to the heights that the smartphone brand has reached now. realme aims to maintain a certain level of transparency with its community of fans. Having them be aware of how realme operates, what goes into the making of realme devices, as well as realme’s core values is highly important in developing the tech democratizer’s relationship with its fan community.

For this reason, realme decided to pull back the curtain on Wednesday, 10th August 2022 during its 828 Fan Fest celebrations and took a group of select fans to their assembly plant on the outskirts of the city of Lahore. This inside look was followed by an exciting hi-tea and bowling session at the bowling alley, Uptown LA. This Fan Meet up presented a wonderful opportunity for realme fans to mingle with each other and get to know the people in the community as well as familiarize themselves with the faces behind their favorite technology brand.

Fans gathered at realme Headquarters in Lahore at noon on Wednesday after which they were loaded into buses provided by realme to take them to the assembly plant. While on the bus, realme fans and employees took part in various, engaging ice breaker activities to set the mood for the remainder of the day and dispel any inhibitions that fans may have about socializing freely. Once they arrived at the assembly plant, they were taken inside to get a breakdown about how realme devices are made. The functionality of the plant was explained while the fans were taken through the production process of realme phones from start to finish. Fans even got to witness the testing machinery in action as they marveled at the durability of realme phones during the drop test, scratch test, and more.

Also Read: Camon 19 Neo – A must-buy Smartphone with all that you

After exploring the factory to their heart’s content, the fan community was loaded into buses again to be taken to the final venue of the realme Fan Meet up – Uptown LA. The venue was decked out in realme décor to welcome the fan community with grandeur. Once at the venue, the community was greeted by the Country Director of realme, Syed Mashood Hassan, who delivered an inspiring welcome speech thanking the fans for their unwavering support during both smooth times and turbulent times and emphasizing the fan-centric approach of realme’s operations. A cake cutting ceremony was held with the participation of realme fans and employees to share the celebration. The floor was then opened for the community to hit the bowling lanes and roll out a new high score. A hi-tea buffet was also provided for fans to indulge in as they enjoyed their games. Each attendee of the realme Fan Meet up also left the event with their own personal goodie bag of giveaways.

While this may have been the first realme Fan Meet up of its kind, it certainly won’t be the last. As a brand, realme prioritizes getting to know its consumers so that it can cater to their interests as best as possible. However, it is equally as important that realme’s fans get to know the company on a deeper level to better understand the efforts they are making for them in the market as well as to acquaint them with the human faces behind the brand. Events such as these are essential touch points to deepen pre-existing bonds between a brand and its fans. Stay tuned for more exciting updates regarding realme Fan Fest activities throughout the month of August.

OnePlus 8T to launch on the 14th of next month?

Samsung foldable phone not called Galaxy Bloom – rather, the Galaxy...