Rumors are circling in the news that the president of United Bank Limited has been fired. He has been alleged of a fraud of Rs.12 Billion. He is not alone in the fraud. With him, 160 bankers have also been accused of the fraud. Sources tell us that the president UBL and his team were called back from the airport when they were going abroad to attend a business meeting. These rumours also got fire when it was told that the president of UBL Mr.Wajahat Hussain along with other 300 bankers was fired on the orders of the State Bank of Pakistan.

On confirming to the spokesperson of UBL, he denied all these rumors. He said that no such orders have been issued by the State Bank of Pakistan. President or other senior management of the bank is not being removed by the central bank. 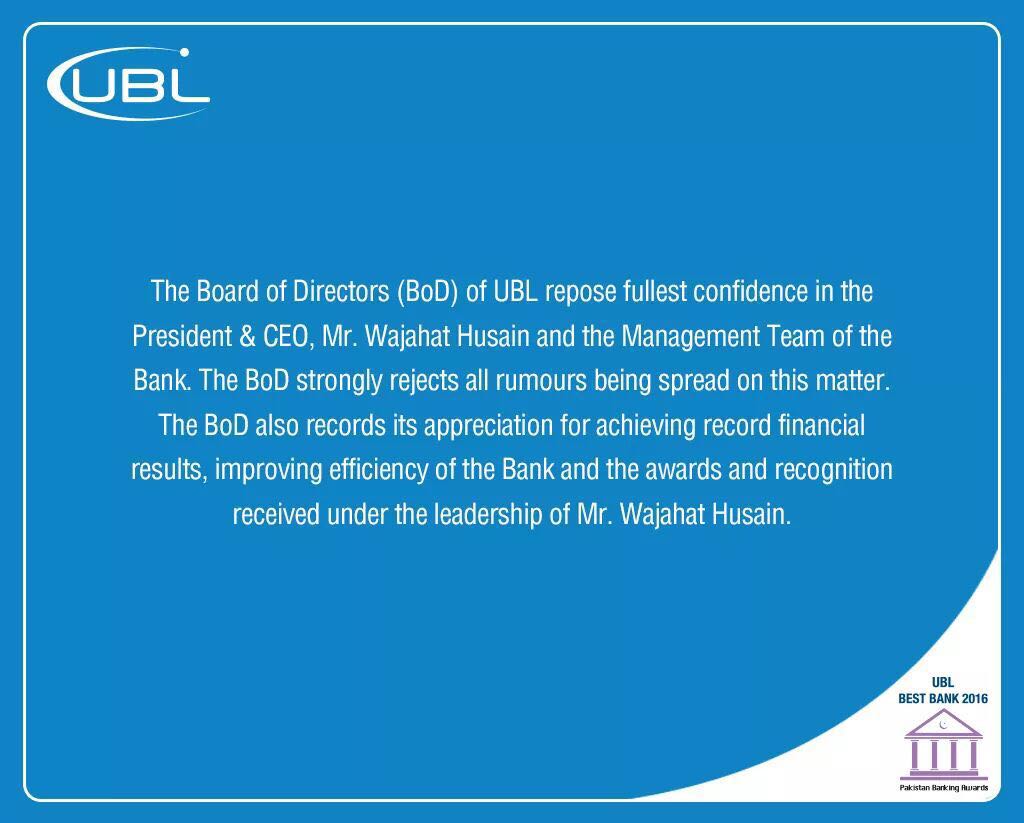 He further said that a circular was issued by the State Bank which ordered the banks to avoid any foreign tours. If the president of UBL was sent back from the airport, it would have been because of the same order. State bank has asked the UBL management to clarify its position on the ongoing rumors.

A meeting was called for the Board of Directors of the UBL. In that meeting, the statement was released that the board of directors has full confidence in the president of the bank. The board has rejected all the rumors that are in the news. They have said that the management will keep on working for the bank and the president is not going anywhere.

Moreover, the board has appreciated the financial success of the bank under the presidency of Mr. Wajahat Hussain. All the records that the bank set were recognized by the board of directors. The award-winning the presidency of Mr. Wajahat was highly appreciated in the meeting. Also, a request was made that no such rumors must be spread without confirming from the bank management.

Another rumor states that Miss Sima Kamil has joined the UBL as the president from HBL under this entire difficult ongoing situation. It has been said that the situation will become clear in coming days. But sources are confirming that the president is changed because of the big fraud case of 12 Billion rupees.