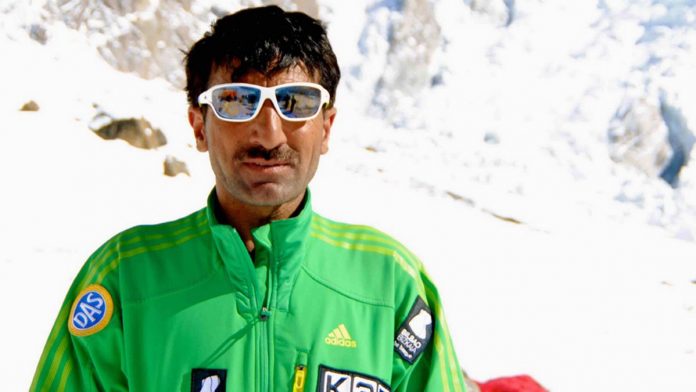 Sajid Sadpara who is the son of the legendary mountaineer, Ali Sadpara last saw his father on February 5th. He recalls how he and his father were on roaring high up towards the K2 peak, the second largest peak in the world, when he had to turn back 8,200-meters into the journey because of an equipment glitch which  affected his oxygen levels in the tank he had packed along with him. However, he recalls how his father was motivated and ready to continue his journey along with Icelandic mountaineer, John Snorri. “He was excited to become the first Pakistani to summit the unclimbed K2 mountain in the winters”, said Sajid.

He further added that after he had left him that afternoon, his father said, while pointing to the mountains around him: “God has given Pakistan a beautiful gift. Which is why we, Pakistanis, should be the first to climb this peak.” It has been four days since the legendary mountain climber lost communications with the ground and thus far no one has been able to establish contact with the Ali Sadpara. According to Sajid, his father would be at an altitude of 8000m.

Must Read: K2 Climbers Including our Own Sadpara Search Continues as Weather Worsens

Sajid added “To be honest, I am still hopeful of his return. My father is a survivor you see. He has always been such”. Sajid further added that “When he was born in 1976, in the remote village of Sadpara in the mountainous Gilgit-Baltistan, no one thought he would live. My grandmother had given birth to 11 children, of whom only two had survived, a son and daughter. My father, her last child, proved everyone wrong.”

Sajid further says that after his father had comoleted his FA from a government college in the city of Skardu, he started to work as a high-altitude porter. That is when he fell in love with the art of mountain climbing and well the rest is history. He will easily go down in the history books as one of the best mountaineers in the world. We surely hope our nation’s treasure is fine and that he somehow manages to find a way back and return to his family. The nation is tuned in for any news regarding Ali Sadpara, we surely hope he returns.

Govt Planning to Launch ‘Naya Mazdoor’ Initiative for the The Working...