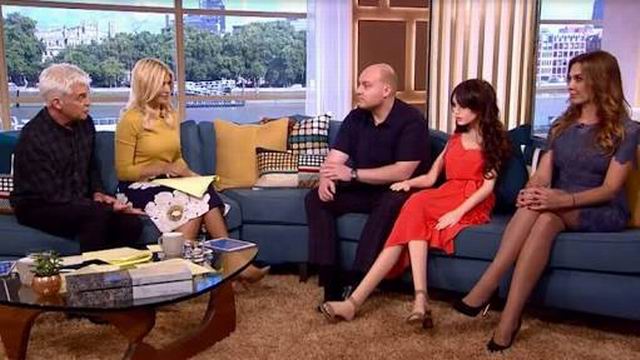 Sex dolls are a threat to family relationships. Right?

Sex dolls replacement for women or not?

The idea is wrong to some extent. How? Let’s go through the views of the creator of a ‘philosophical’ sex doll.

Squire manufactures a sex doll that comes with a “family mode,” and he defends the use of X-rated robots by admitting on morning television that he and his spouse enjoy romantic liaisons with “Samantha”.

Samantha is a £3,000 ($4,000) rubber humanoid that is believed to enhance people’s performance in the bedroom.

We saw ITV show ‘This Morning’ taking a bizarre turn when a  human-sized sex doll joined the show alongside its co-creator Arran Lee Squire.

Squire is not of the view that sex dolls can replace humans, but he claims that Samantha can be incorporated into family life.

Squire is the father of two and enjoys talking about animals, philosophy and science when it comes accompany Samantha – the doll that has a family mode.

Samantha is programmed with 1,000 jokes that makes it advanced.

The ever-increasing fear that the robots could one day replace humans is a useless thought according to Squire. He doesn’t admit that a sex doll can replace a woman.

While talking about the functions that Samantha has, Squire makes it clear that the doll is interactable verbally and physically. Samantha has sensors but not a replacement for the people.

Squire is not interested in replacing women but interested in the enhancement of the mutual relationships and Samantha works as a supplement in this case.

The doll also responds when someone claims her to be in love with her.

Arran Lee Wright is confident enough to call Samantha definitely hygienic but is not aware either the doll could be placed in the dishwasher or not.

Squire is the view that to have sex with this doll doesn’t seem as if having with a car GPS and he says that the doll is a beautiful robot in a human form.

The texture of the doll makes people feel real skin and Squire is working on the ways where this doll can be linked to the higher power source and could be warm.

Views of Squires wife make us realize the truth hidden in his claims as she says not to be worried about having a sex doll in the house. She claims to have had fun with this doll.

“I’m not worried at all because I’m not replaceable at all by Samantha. She has actually helped us to enhance our relationship. We have fun with her,”.

However, everyone has his own point of view. We can’t overpower the thoughts of people. Our claims,  our argues are just to bear their hearing and we can’t change their minds. That’s why the people present at the time of interview chimed on with their different opinions.

Some people are describing the use of sex doll as a weird and wrong deed, while the others take it as a fun bot.

But whatever the way Squire uses, he can’t convince me because I am one of those who ask “Why do we depend upon the robots when it comes to having some fun? Do the humans lack in providing calmness through their companionship?”