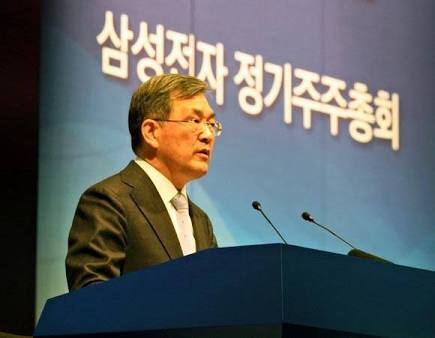 On Friday, the CEO of Samsung Electronics Kwon Oh-Hyun resigned following the unprecedented crisis that is being faced by the South Korean tech giant.

He said in a statement,

“As we are confronted with unprecedented crisis inside out, I believe that time has now come for the company (to) start anew, with a new spirit and young leadership to better respond to challenges arising from the rapidly changing IT industry,”.

Kwon Oh-Hyun joined the company in 1985 as a researcher and later in 2012 got elected as CEO of Samsung Electronics.

Even though the expected profits of the company are hitting an all-time high in the third quarter but Kwon resigned the post wishing the company an upraise of the profits.

His resignation comes as the company tries to overcome a bribery scandal that sent Lee Jae-Yong to jail.

Lee Jae-Yong was de-facto head and heir to the Samsung empire.

Company’s estimated operating profits for the July-September period of 14.5 trillion won ($12.8 bn) marking a record for quarterly profit, is a sign of good news for the company. This profit is nearly tripling the 5.2 trillion won earned last year.

Samsung’s sales are expected to have surged 29.65 % on-year to 62 tn won, with the booming semiconductor business boosting the bottom line of the company.

CEO sees the company in the throes of an “ unprecedented crisis ” despite its spectacular performance. That’s the reason he is stepping down.

He said in a statement,

“Fortunately, the company is now producing best-ever results but this is merely a fruit of decisions and investment made in the past”.

Samsung has not announced the performance estimates of every business division but its semiconductor business is being believed to have contributed to the record-beating report.

The company will release its final earnings report later this month.

The company has been seeking to move past a bribery scandal that witnessed the company’s de-facto head Lee Jae-Yong getting into jail, and to overcome a damaging recall previous year of its flagship Galaxy Note 7 smartphone for exploding batteries.

In August, Lee was found guilty of bribery, perjury and other charges relating to payments made by Samsung to ousted president Park Geun-Hye’s secret confidante Choi Soon-Sil. He is now appealing his five-year sentence claiming himself to be innocent.