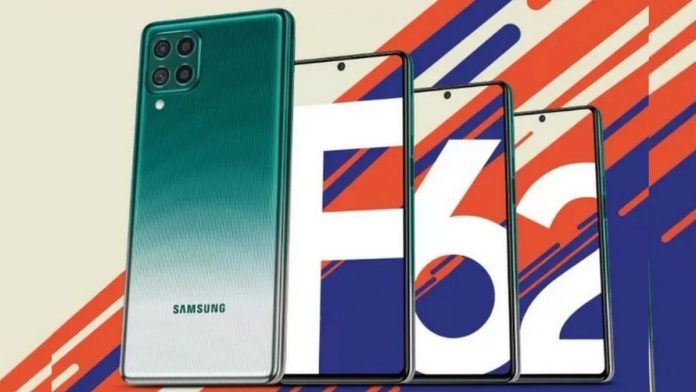 Korean giants Samsung are looking to set a mark in the mid-range market of smartphones this year as they come up with a phone which packs a very-very large battery, in terms of capacity for a new phone they have just launched. After seeing so many teasers and leaks regarding such a phone, Korean Tech innovators, Samsung have just launched the new Galaxy F62 in India and as per the listing, the phone is going for $345. The highlight feature of the new smartphone is that it packs in it a massive 7,000 mAh battery along with a 7nm Exynos 9825 SoC which is a processor that has also been featured on the flagship Galaxy Note 10.

In regards with the design, the Galaxy F62 comes loaded with a 6.7-inch AMOLED display which has the capability to display FHD+ resolution and on the screen you will also find a punch-hole camera located in the top center as you may find in most Samsung phones in the market. On the back, the phone has a textured finish and a square-shaped camera setup which houses four lenses. The LED flash is placed right below the primary camera and the fingerprint sensor is set atop the power button, which has been mounted on the side of the phone.

As discussed before, the phone will gain its power from the flagship Exynos 9825 SoC which was first introduced in the Galaxy Note 10. The processor is coupled along with up to 8GB RAM and 128GB of storage, however, you can also further increase the storage of your device to up to 1TB via a microSD card. On the software front, you will get an Android 11 out of the box with the updated One UI 3.1.

Moreover, the main camera found at the rear of the device is setup which consists of four lenses. This primary lens is a 64MP sensor which will give you some good quality standard photos. The setup also includes a 12MP ultrawide camera, and a duo of 5MP lenses which are to be used for depth sensing and macro photography. The camera app is loaded with Samsung’s usual features which are: Best Moments, Smart Crop, filters, Boomerang, and more. The punch-hole selfie camera is a 32MP shooter.

While the camera setup sounds very attractive, the highlight feature of the smartphone is the humongous 7,000 mAh battery which also has support for 25W fast charging with a compatible charger included in the box.

5 predictions on what Smartphones may look like in the future!

First Love of mobile phones─ Nokia 3310 is back

Next year’s iPhones are going to be even more expensive