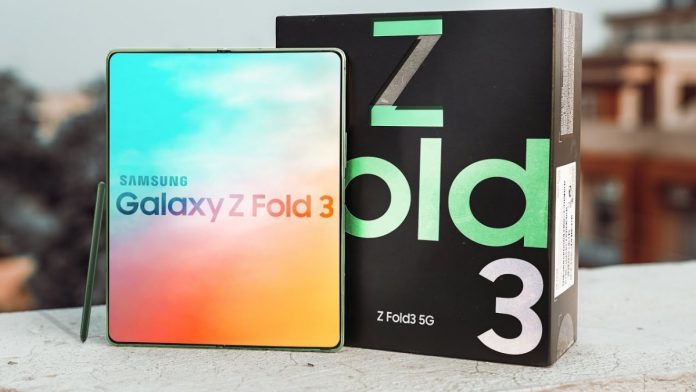 Korean manufacturer Samsung has two foldable de devices planned for release this year and they are the Galaxy Z Fold 3 and the Galaxy Z Flip 3. Both these devices should indeed be announced in August but we don’t have to wait until then so as to know how they will end up looking like. Indeed renders of the Fold 3 have now made their way online, and they give us an early look at what Samsung has in store for us at its next Galaxy Unpacked event.

The Galaxy Z Fold 3 will keep the inward folding design that had been there on its predecessor, the Galaxy Z Fold 2. So you get an external display as well as a larger one inside that is foldable. Just a few days ago, the Chinese leaker in Ice Universe revealed that the outer display actually measures 6.23 inches and has a resolution of 2268 x 832 while the inner display is 7.56 inches with a 2208 x 1768 resolution.

While the overall form factor happens to be unchanged as can be seen in the renders thanks to 91Mobiles and Digit India in collaboration with I Leaks – there still are notable differences.

The frame which happens to be around the Z Fold 3 is now flat, though it tapers around the edges. There are still antenna lines which are visible both at the top as well as the bottom and the position of the USB-C port happens to remain unchanged. However, while the holes for the speaker grille are the same in number, they are much smaller and spaced apart.

Is Samsung looking to merge the Galaxy Note and the Galaxy...

realme Looks to Capture Infinity with the all new realme 8...