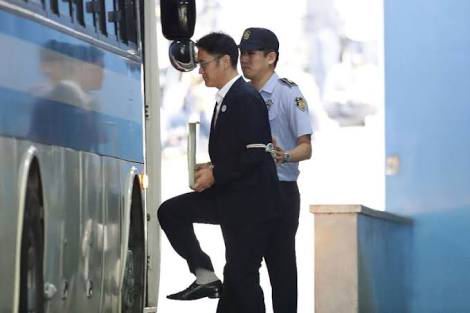 On Friday, the billionaire head of Samsung heir has been sentenced to five years in prison. The sentence was announced on finding  Lee Jae-Yong guilty of bribery and corruption.

A South Korean court found him guilty of bribery, a verdict that is enough to damage company’s reputation on the globe.

Lee, the only son of South Korea’s richest man Lee Kun-hee is vice chairman of the Samsung Group, who has been embroiled in a corruption scandal for months ago.

Lee was accused of donating up to $ 38 million to various organisations at the request of former South Korean president Park Geun-Hye. He remained detained for this accusation.

However,  Lee has denied all the accusations and his lawyer has said that they will appeal against the court’s decision of 5 years prison.

Song Wu-Cheol is one of Lee’s lawyers who has denied the verdict saying “The entire verdict is unacceptable,”.

While on the other side Lee’s prosecutors had demanded a 12-year jail term for him.

The Prosecutors also accused him of embezzlement, hiding assets overseas, concealment of criminal proceeds and perjury.

Though not clear it is that either the prosecutors are right or Lee’s denial, but one thing is clear according to the figures revealed by the company that company’s shares fell down by 1.5 % due to the verdict.

The trial is not significant to mobile giant only, the guilty verdict is also linked to former President Park.

Former President Park, who had been earlier charged with abuse of power and coercion by pressuring big businesses to contribute to non-profit foundations has now been removed from his office.

Park had also been charged with taking bribes from Lee in exchange for supporting his succession she has denied this thing.

The corruption scandal has also convicted Choi Soon-Sil -another close associate of Park’s- who was sentenced to three years in jail in June.

Choi was found guilty of meddling in state affairs via his friendship with Park. Also, he had a wielding influence on massive conglomerates in South Korea.

It is expected that ruling on South Korea’s first female president will happen in October.

A Closer Look At The KIA Carnival 2021