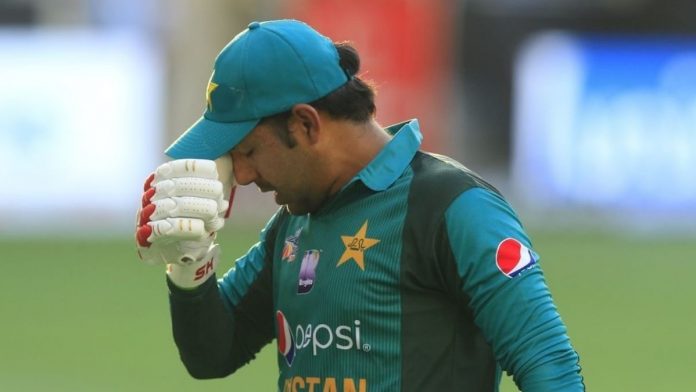 The former captain and wicketkeeper Batsman has fallen down the hierarchy in recent times. The Champions Trophy winner is now behind wicket keeper Rizwan in the pecking order and perhaps has lot a bit of confidence. Sarfaraz Ahmed reportedly refused to play the third and final T20I against the  English side in match which was held at Manchester last week. He only agreed to play after he was talked into it by head coach Misbah-ul-Haq, batting coach Younis Khan and captain Babar Azam, that is according to GeoSuper.

The news comes as pretty shocking if anything, sources who reported the matter say that Sarfaraz Ahmed finally ran out of patience when the management gave him a chance to play in the final match of the T20 series after he was kept on the bench for the rest of the tour, which include 3 tests and 3 T20I, starting him in the third and final T20 game of the series. After being selected for the final match, Sarfaraz Ahmed wasn’t to excited with the opportunity and he in turn expressed “deep” reservations and refused to play the match however, he was persuaded to reconsider upon the think tank’s guarantees.

Must Read : Babar Azam loses the number 1 spot in the T20 rankings to Dawid Malan

A Geonews representative took the matter to the current head coach of the Pakistani team at a press conference held in Lahore on Monday. Misbah in that regard said that Sarfaraz did not refuse to play but but rather “expressed his reservations”, which he said was something “I would also have done if I were in his position” The head coach further added “any player can have concerns when given the final match of a tour and that’s what Sarfaraz also had. He had pressure that if things don’t go his way then he could be in trouble,” Misbah said.

But before any other developments would arise in to his concern, the former Pakistan captain was given assurances that “even if your performance is not the same, you will still remain a part of the team.” It is pretty surprising to see a man of Sarfaraz’s calibre show concerns on being given an opportunity to play a series final match. Sarfaraz is well known for his fearless attitude on the pitch and to see him show signs of concern comes as a surprise to many.