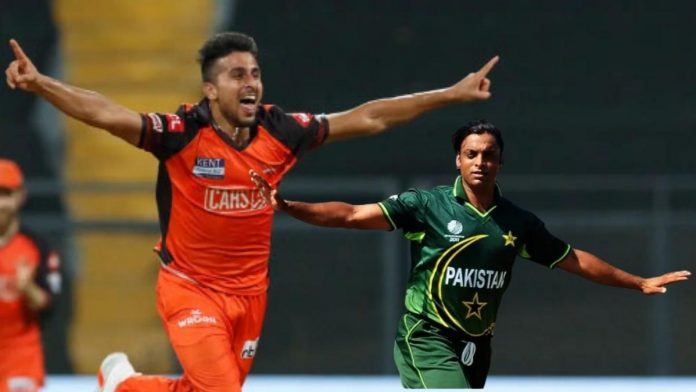 SunRisers pacer Umran Malik has amazed the cricketing world by his speed in the current year in the Indian Premier League (IPL). Umran has been able to record speeds over 150 kmph consistently and, once, he passed the 157kmph mark also.

Speaking prior to SRH’s match at home against Kolkata Knight Riders, former Pakistan pacer Shoaib Akhtar said that he hopes that the youngster can beat his record of one of the fastest deliveries (161.3 kmph) and added that Umran must stay clear from injuries.

“I want to see him have a long career. A few days ago, someone was congratulating me as it’s been 20 years since I bowled the fastest delivery but no one has been able to break the record. But I said, ‘There must be someone who can smash this record’. I will be happy if Umran breaks my record. But he needs to ensure that he doesn’t get injured in the process. I want to see him playing for a long stretch without any injuries,” Akhtar spoke during an interview on Sportskeeda.

Shoaib Akhtar whom was also the very first crickter in history to cross the 100-mile mark He is also adamant about Umran to be a part of India as he believes Umran Malik deserves to be on the international stage.

“I want to see him on the world stage as he belongs there. At present, there are not many people who can cross the 150 kmph mark. We have seen that Umran has been bowling consistently at that pace. I want Umran to that 100-mph mark at the back of his mind. I will be happy if he enters the 100-mph club. But he has to stay away from injuries which can halt his career,” said the coach.

In the match in the match against KKR, Umran returned figures of three for 33 increasing his score to 18 wickets for the current season.