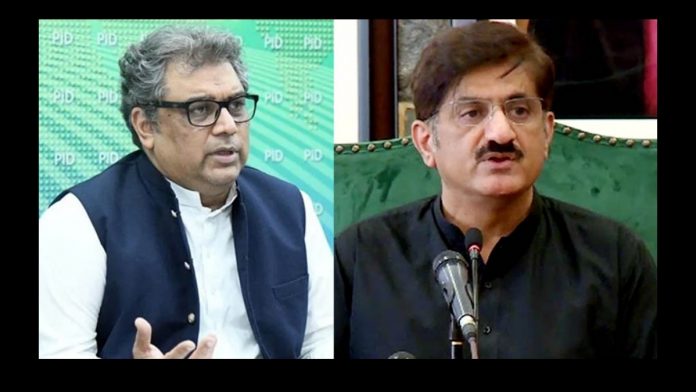 Sindh Chief Minister(CM) Syed Murad Ali Shah and government Minister for Shipping and Maritime Affairs Ali Zaidi wrote letters to Prime Minister Imran Khan looking for his intercession after a brief trade between the two during a gathering of the Karachi coordination advisory group on January 16, it arose on Saturday.

In a progression of posts on Twitter, the government serve itemized his rendition of what unfolded in the Jan 16 gathering, saying he had “mentioned CM Sindh to incorporate the devolution of associations like [Sindh Building Control Authority] SBCA and [Sindh Solid Waste Management Board] SSWMB to divisional levels as submitted by him months back”.

Zaidi claimed the central pastor advised him “I’m not responsible to you” threefold at which he [Zaidi] left since “there was no further requirement for me to burn through my time sitting in that gathering”.

Zaidi additionally posted a duplicate of the letter the Sindh boss priest had purportedly kept in touch with the head over the fight, griping of the government clergyman’s “wild direct”.

As indicated by the duplicate of CM Shah’s letter to the PM shared by Zaidi — the realness of which was not tested by Sindh Education Minister Saeed Ghani in a presser recently — Shah said Zaidi acted in a “antagonistic and aggressive way” and that such lead had been shown by him in the past also, which “was indecent of a resident not to mention a government serve”.

Shah said through his letter he was enlisting his dissent with the executive and anticipating “some activity”, adding that later on he expected “development (somewhat), bury alia, will be viewed as legitimacy for arrangements at such high positions”.

Asserting that Sindh CM Syed Murad Ali didn’t have the “decorum and habits on the most proficient method to address the workplace of the head administrator”, Ali Zaidi likewise shared a duplicate of the letter he had kept in touch with the chief, reacting to the “allegations of rowdy conduct”.

In his letter to the PM, Zaidi said the allegations against him demonstrated “clear mala fide goal”, adding that the main pastor was liable to the individuals from the council.

Zaidi asserted the main pastor “reliably avoids the conversation of devolution” and that “his allegations are only an endeavor to sidestep accountability on the postpones he and his administration are enjoying purposely”.

“The fraud and inadequacy of [Murad’s] government for longer than 10 years has nothing to show aside from plunder constantly,” he composed, adding that the Center had “gone the additional length” to assist Shah with improving Karachi’s foundation and aid the area’s turn of events.

“Is it not indefensible and dishonorable that because of [Shah’s] plots, a powerful advisory group […] has had different gatherings just to talk about how to perform essential community assignments, for example, cleaning trash and tempest channels?”

Zaidi kept up that no advancement had occurred on essential issues, charging that CM Shah had kept the council “just talking” to shroud the “utter inadequacy or noxiousness of the Sindh government”.

In his letter, the administrative clergyman additionally brought up that it was not the Center’s obligation to ceaselessly embrace metro assignments while the common government keeps on avoiding its duties.

“In the event that the Sindh boss clergyman isn’t earnest and helpful in settling the issues of Karachi, at that point we will gain no ground, and in the end the individuals of the city will endure as the city is permitted to rot under community disregard.

“In any event, we should request that [Shah] satisfy the responsibilities made to you, the government priests and the country on live TV to execute the Karachi improvement plan,” he composed.

Pakistan has extended visas for all foreign nationals