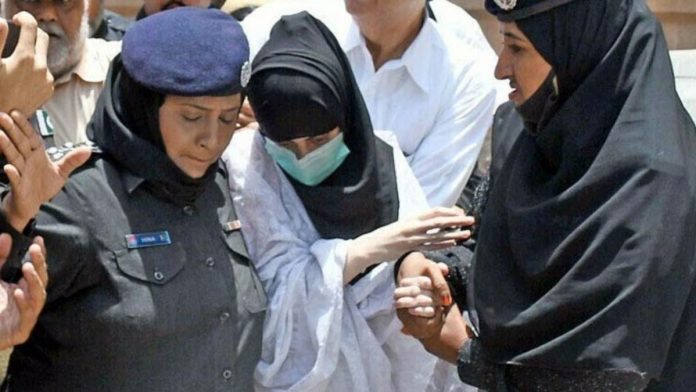 On Wednesday, the Sindh High Court (SHC), announced a reserved verdict for Dua Zehra. This will allow the Karachi teenager to choose whether she wants to live in Karachi with her parents or with her husband.

The SHC had already reserved its verdict for today.

In its written verdict, the SHC stated that there was no evidence that the girl was abducted. This stopped authorities from filing abduction cases.

The court ruled that “no evidence was found” of the girl’s kidnapping.

In a three-page written verdict, the investigation officer (IO), was ordered to submit an interim challan as well as a medical record for Zehra.

The court ruled that Dua Zehra must be produced before Lahore High Court. The verdict reads, “The trial court will continue investigating as per the law in this case.”

The parents filed a petition regarding the alleged abduction Karachi teenage girl.

After a medical examination, which revealed that the girl is between 16 and 17 years old, she appeared in court today.

The father’s counsel stated that they would like to see some documentation to prove the girl’s age at 14.

However, the SHC judge rejected the plea and stated that the case relates to her recovery, and that the matter should now be brought before the trial court. The court allowed the parents to meet with the girl.

Later, the parents met Dua Zehra. The police later took her with them to a meeting. “We met our girl in the chamber, and she wanted us to go with her,” Zehra’s mother said. She also added that they had asked the judge for another statement but he declined.

The father appeared before the judge as well and requested that he review his decision because the girl wanted to travel with them. However, the court rejected the plea and stated that the girl had made a statement under oath that her parents did not want her to go.

The court admonished the father and said, “The statement under oath has a great importance. We cannot believe your words when the little girl has made a written statement in this respect.”

It is important to mention that Dua Zehra’s parents had approached police hours after she disappeared from her Alfalah Town, Karachi house on April 16. They had also appealed through several channels for their help in finding their daughter.

Police discovered that Dua Zehra had been married to Zaheer in Lahore, days after her disappearance.

Dua was allowed to live with her husband by a Lahore court. While the Model Town court issued a verdict on the plea of police to send Dua (14-year-old according her father’s claim, and 18-year-old as per hers) to Dar-ul-Aman she rejected the request by police and allowed Dua Zehra and Zaheer Ahmed to live together.

The girl was brought before the SHC, where she was subject to a medical exam. According to the medical examination, she was between 16 and 17 years old.