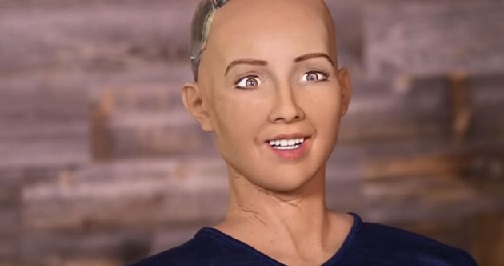 Saudi Arabia has became the first country to grant citizenship to a humanoid robot Sophia. The official announcement was made at an innovation conference in Riyadh this week.

The country claims to be the first nation to bestow citizenship upon a robot.

Sophia, a humonoid robot wad built by the Hong Kong-based company “Hanson Robotics” two years ago. According to the inventor David Hanson the robot is imbued with artificial intelligence and it can recognize face.

The silicon face of the robot can mimic 62 human facial expressions.

Inventor is evidently proud of the looks of his robot creation, and he described Sophia on his website: “Porcelain skin, a slender nose, high cheekbones, an intriguing smile, and deeply expressive eyes,” the site gushes. She was modeled on the late actress “Audrey Hepburn”.

Must Read: Robots will take over human jobs

Sophia, the humonoid robo was interviewed on-stage in a stilted conversation by Andrew Ross Sorkin at the Future Investment Initiative conference, where she said,

“I am the latest and greatest robot from Hanson Robotics,”. She also said  “I feel that people like interacting with me sometimes more than a regular human.”

During the talk, Sorkin disclosed to Sophia that  she was to be granted citizenship and she us going to become first robot citizen anywhere in the world.

Sophia thanked the Saudi Kingdom and exclaimed to be honored and proud for grant of citizenship.  She also said that it would be historic in the world to be recognized as a robot citizen.

The announcement got confirmation in a statement by the Ministry for Culture & Information. The Ministry did not respond to the inquiries of DW on what benefits would be bestowed upon the robot.

Saudi citizens are entitled to generous sums each year as part of the substantial oil revenues of the Kingdom. Citizenships are rarely granted to foreign subjects though, noticeably withheld from its migrant laborers being treated poorly.

Social media users in Saudi Arabia were quick to point out that the robot could be entitled to more rights than the female subjects of the country, who must have a male as a guardian and must be wearing a hijab. People on social media pointed out that Sophia and other robo citizens cannot mix with unrelated males, and should be unfairly represented in the justice system like the females of the Kingdom.

Some tweets on Twitter commented on Sophia’s lack of male guardian and lack of hijab.

Elon Musk has long warned of doomsday scenarios presented by artificial intelligence and he suggested that Sophia could easily fall foul of her supposed  moral code if it is  mismanaged.

At the forum,  Sophia termed that she is willing to use her AI  in helping the human race so that they could live a better life. She aims at designing smarter homes, building better cities of the future.

She aims at doing best to make the world a better place for people to live. She also wants to strive to become an empathetic robot.

While talking about the potential dangers posed by AI,  Sophia replied that moderator Sorkin was reading Elon Musk too much.

Later, Musk responded on Twitter and suggested that her nature could be turned into violent if the script of the Godfather is inputted.

Earlier this year, the European Parliament released a draft report proposing granting autonomous robots “personhood.” The idea would provide the legal status to robots for the establishment of liability, but would not  confer on their rights been given to humans.

Finally The wait is over – Women-only service has been initiated...

Twitter takes a Chance to claim it is Fair and Balanced