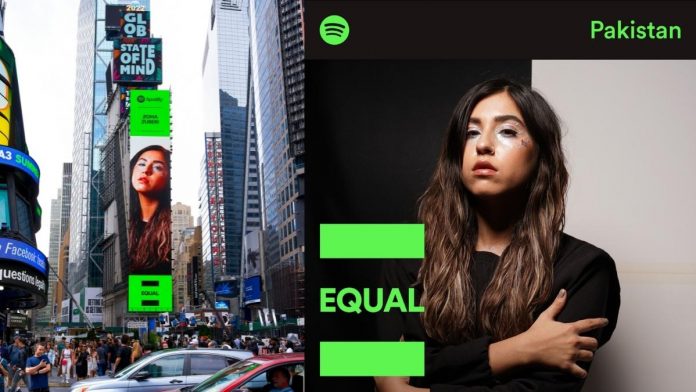 Spotify announced Zoha Zuberi as June’s EQUAL Pakistan Ambassador. The program is part of Spotify’s commitment to showcase women creators revolutionizing Pakistan’s music industry and to celebrate the women leading innovations and exciting developments in the Pakistani music scene. Zoha became the fourth Ambassador after Arooj Aftab, Mehak Ali, and Hadiqa Kiani, representing young and established women artists in the country. In addition, as the EQUAL Pakistan Ambassador of June, Zoha was featured on a Spotify digital billboard at Times Square NYC on the 23rd of June, promoting her latest single, “I Rather“.

For the last five years Zoha Zuberi, an independent singer and composer from Pakistan’s capital city, has changed music dynamics both within the country and internationally. The vibrant indie musician is a voice of her own, amongst the women making a mark for themselves in the entertainment scene through their unique compositions. Through songs such as ‘Kuch Kehna Chahta Hun‘, ‘Judaa‘, and ‘Jo Tu Na Mera‘, Zoha has captured the attention of a global audience across India, the US, Bangladesh, and Canada.

When asked about her feelings about being the EQUAL Ambassador of the month, Zoha said, “A sense of gratification is overwhelming but what this really means to me is far more than just a sense of personal achievement. It is for me and the woman of Pakistan to step into the spotlight. For all of us to express ourselves and take our place in the music scene.”

Zoha Zuberi is also featured on Spotify’s EQUAL Global playlist alongside artists from Poland, Morocco, Peru and more, along with being on the cover of EQUAL Pakistan.

A dinosaur with multi coloured feathers been discovered in China

MoltyFoam campaign of billboards converts into comfy beds for the homeless