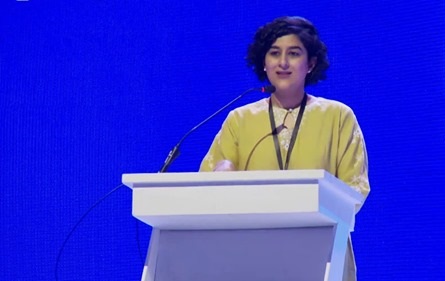 The ‘Digital Pakistan’ initiative which is the ambitious program of Prime Minister Imran Khan in a bid to digitize the country was launched. The news which caught the eye of the nation was something else. The competent woman professional who is leading this project left her job at Google to work in Pakistan. Her name is Dr. Tania Aidrus , a former Chief of Staff and Head of Strategic Initiatives on the Next Billion Users (NBU) team at Google.

Tania Aidrus quit her high profile job in Google and returned to Pakistan after nearly 20 years. Tania graduated from Brandeis University and later went on to complete her higher studies from MIT Sloan School of Management.

She held key positions in Google. She was a leader in the Global Business Organization at Google in United States and then moved to Singapore to take charge as the Country Manager for South Asia Frontier Markets. She founded her own solution company with the name of ‘ClickDiagnostics’ which aims towards rural women accessing the worldwide medical consultancy.

Who convinced her to return?

To look at her work, the notable thing that comes to the understanding is that she always wanted to work for the betterment of the people. Her story, that she told was also interesting, she described that how she was invited to work for the country.

“I spent 20 years outside Pakistan, I went abroad with a very strong message about Pakistan. People say that I am politically connected to some people. That is not the case, I don’t have a relationship with anyone in the government. My objective is simple. I just want Pakistan to succeed,” Aidrus said in her inaugural speech.

During the inaugural ceremony for digital Pakistan she revealed that prior to her acceptance to the invitation she went on leave from Google and visited Pakistan to get familiar with the ground realities. And to her surprise, she was pleased that all the basic infrastructure was there that was needed to start the initial work. She mentioned NADRA as the digital hub and an asset where all the Pakistanis are digitally registered.

Pakistan obviously is not an easy turf to work. The PM himself briefed her of all the challenges that she is signing into. Jahangir Khan Tareen played a key role to persuade her. The governance issues that is infesting Pakistan may take some time to resolve.

NDRA is the biggest asset, that is practically nonfunctional in this regard. There’s a lack of central digitization, and governance lack connectivity and coordination. If used properly, this platform could be the answer to the basic economic and governance plight.

What’s next for digital Pakistan

The only way forward is the e-governance system. So far, the major impediment is the bureaucratic hindrances and resistance that she had to face in order to achieve the desired results.

Pakistan is struggling hard to get back on track. The diaspora abroad is the biggest untapped asset that Pakistan possess. If that asset would be used and recognized, there are new avenues waiting to put Pakistan on the right path. Not to mention, that diaspora pour about $22b dollars into Pakistan every year. And skillful Pakistanis are striving hard to get back to their native country.

However, Dr. Tania Aidrus is not the first Pakistani to head the PM’s new project. Half of the economic team consist of the Pakistani professionals who were brought back to Pakistan. This include Dr. Abdul Hafeez Shaikh, the finance advisor and SBP governor Raza Baqir. “Ehsas”, the poverty alleviation program is also headed by Dr. Sania Nishtar who left her job in UN to serve Pakistan.

MediaTek Applies for Permission From the US

Could wireless charging finally feature within a OnePlus flagship?