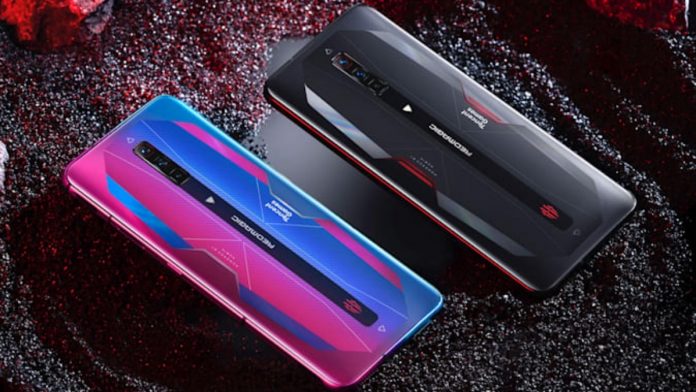 RedMagic, a popular brand which focuses on providing the best gaming smartphones in the market has just launched a new smartphone in collaboration with the Chinese gaming giant Tencent. The new RedMagic 6 and 6 Pro are high level devices which are now available on order in China with a global launch expected to come later in the month.

The RedMagic 6 Price in China for  $585 for the base model which comes with 8GB of RAM and 128GB of storage. The premium version in the series however will cost you almost twice as much as the base model, as it goes for a price RedMagic 6 Pro of $1,020 however, it does come with 18GB Ram and 512 GB storage.

The RedMagic 6 is one of the most powerful smartphones to date, the phone comes loaded with a Qualcomm Snapdragon 888 processor, active fan cooling, and a 6.8-inch 1080p OLED display which has an amazing refresh rate of 165Hz, this makes it the fastest phone screen on the market. RedMagic has also claimed that the smartphone has a single-finger touch sampling rate of up to 500Hz, or up to 360Hz with multitouch. The touch-sensitive capacitive “shoulder triggers” on the side, are sampled at about 400Hz which just adds to the tremendous capability of the phone.

Also Read: OnePlus 8T’s camera gets a score of 111 on the DxOMark testing

The RedMagic 6 Pro supports up to 18GB of RAM and has a superfast 120W fast charging capability as well. According to the makers at RedMagic, they believe that the phone can be fully charge the 4,500mAh battery in just 17 minutes which is a record time. The non-Pro 6 comes with a larger 5,050mAh battery but with a relatively slower 66W system which will take just 38 minutes for a full charge, which is still quite the offer don’t you think?

This Tencent collaboration was quite unusual however upon asking RedMagic of the collaboration with Tencent, RedMagic said that the company had engineered the phone’s software to perfectly suit Tencent apps such as WeChat and QQ, with 50 percent faster read and write speeds. The company have also added Tencent’s Solar Core gaming software which is preloaded, and the company has assured customers that this will significantly improve game response speed, frame rates, and network latency.

The Galaxy S20 to Replace your Physical ID?